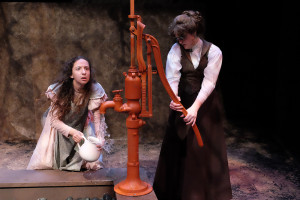 “Language,” Anne Sullivan tells us, multiple times in multiple ways, is “the only way out” of the mind-prison that is deafness and blindness.

Sullivan is “The Miracle Worker,” who brought discipline, words  — and the world – to a young untamed and incorrigible Helen Keller. In William Gibson’s play, it’s a battle royal, until Sullivan figures out the best way to “discipline [Helen] without breaking her spirit.”

In this, its 45th anniversary year, Lamb’s Players Theatre is re-visiting the play for the third time (earlier productions were in 1983 and 1995).

No credit is given for streamlining the 3-act drama down to a fleet 90 minutes, which commendably consolidates and concentrates the storyline, though the unresolved father-son relationship still steals focus.

Lambs’ producing artistic director, Robert Smyth, and his wife, associate artistic director Deborah Gilmour Smyth, must not be getting much sleep these days. While they’re continuing to perform in the magnificent (and grueling) three-hour, seven-time-a-week Intrepid Theatre production of “Who’s Afraid of Virginia Woolf?,” he managed to find time to direct “The Miracle Worker” and she created the sound design.

Like the intriguing scenic design (Mike Buckley), the production is partly suggestive and abstracted, partly grounded and naturalistic.

At the outset, Smyth aims to give the audience a brief experience of the world without vision or hearing. Then voices begin to be heard, with deliberate distortion. It’s affecting and effective, but lasts longer than necessary.

Once the action gets going, though, it steamrolls through to its heart-rending, tear-jerking climactic end. Helen’s first connection of object to word (“water”) was the springboard to language acquisition, for which the extraordinary Keller, even in her wildest, most untrammeled state, was ravenously hungry.

Helen Keller was born in Tuscumbia, Alabama in 1880. Her father was a former Confederate army captain.  At birth, she had the ability to see and hear, and therefore had exposure to language, but an indeterminate illness at 19 months robbed her of these faculties (in retrospect, the cause was thought to be meningitis or scarlet fever). She went on to become the first deaf-blind person to earn a bachelor of arts degree, and then earn her living as a writer, political activist and widely traveled lecturer. The influential and inspiring author died in 1968, at age 88.

The 1957 play (which was made into an acclaimed 1962 film) was based on Keller’s autobiography, “The Story of My Life.” The side-story concerns Helen’s autocratic father and her half-brother, a fraught father-son dynamic that reflects a feeling of overall disappointment in children, coupled with high expectations for a son and virtually no expectations for a daughter. It’s less potent than the central conflict – between Anne and Helen, and Anne and the coddling family, as she tries to convince them that pity and a complete lack of discipline will not help Helen develop any social or communicative skills.

Charles Evans, Jr. is smart-mouthed and sassy as the son, and Jason Heil bellows his way through the role of the bombastic father. Cynthia Gerber is sweet, soft and ultimately understanding of Helen’s real needs. Yolanda Franklin is solid in the small, thankless role of the servant, Viney.

But this play and production unequivocally belong to Kelsey Venter as Anne and Lucia Vecchio as Helen.

Venter remains tough and insistent, assertively hellbent on controlling Helen’s willful behavior and unrestrained tantrums. Vecchio is a marvel, with her vacant look and stylized moves; her center-stage, solo opening sequence of wild but searching arm movements is especially haunting.

As assistant director and fight choreographer, Jordan Miller has done an excellent job with Anne and Helen’s knock-down/drag-out confrontations, which are so aggressive and believable, they seem downright dangerous at times.

The story never fails to be stirring and inspirational. It’s a testimony to the patience and fortitude of a dedicated teacher, and a strong argument in favor of tough love and avoidance of pity for those with disabilities. And of course, it speaks to the incredible will and resolve of an intelligent woman who was determined to succeed, against all odds.