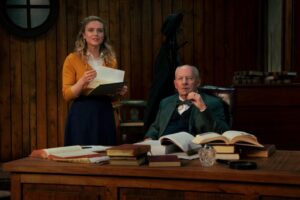 The title can be interpreted in at least three ways.

One of the play’s two characters, a renowned judge, has been trying cases (including at the World War II Nuremberg Trials) for decades.

His snappish temperament, irascible personality and incessant grammar-police pronouncements can be trying.

And his new secretary/personal assistant is definitely trying to make a go of her challenging new job.

“Trying,” by Canadian playwright Joanna McClelland Glass, is a 2004 historical drama based on her own experiences. She really was secretary to Judge Francis Biddle (1886-1968) for the year preceding his death at age 82. He had been the U.S. attorney General under FDR and the primary American judge during the postwar Nuremberg Trials.

In the play, set in 1967, Sarah Schorr, a 25 year-old from Saskatoon, Saskatchewan, has recently moved to Washington D.C. because her husband of two years snagged a job there after receiving his doctorate in Economics at Yale. Unlike him, and her boss (an inveterate Harvard man), she rejects the false cachet of the Ivy League, claiming not to be “one of those pleated, plaid Ivy girls.” She’s plenty smart, though, and unequivocally possesses the primary prerequisites for the job, grit and “spine.”

Having fired a number of unsatisfactory retired civil servants, Biddle expected to get an “obedient, pliable” young thing this time, but Sarah is anything but. Relentlessly deferential, she still calls him out on his nonsense, obsessions and irrational demands, and refuses to be bullied.

Ironically, he calls her trying, a “callow girl on a soapbox” and “an insufferable shrew.” She describes him as “a hectoring, domineering old man.” When she threatens to leave, he begs her to stay “for the duration.” Clearly, he knows his time is short, and there’s a lot he has yet to do.

Biddle accurately describes himself as “between lucidity and senility.” He does, indeed, forget names, lose his train of thought and become befuddled at times. But then, he’ll recite an entire poem (e.e. cummings or Edna St. Vincent Millay, Sarah’s favorites) or quote Shakespeare or Proust.

Refusing to change some his mores with the times, he decries “you feeble moderns” and more than once brings up Betty Friedan and “the others burning your… upper underwear” (he can’t bring himself to say the word ‘bra’).

We learn a great deal about his background, since he’s working on his memoirs. His father died when he was six. He was sent about to Groton boarding school, which he loathed. He knew everyone who was anyone up to the mid-20th century, and his family has links going back to George Washington. But sometimes we feel like we’re getting a history lesson.

The interactions become repetitive; it’s a fairly long time before the ice is officially, predictably, broken and they start to get along — mostly because he becomes increasingly infirm. The play, which has many intriguing aspects, could work fine at a taut 90 minutes. Two hours plus is stretching it.

But there are many important discussions of the last century that still resonate today, from civil rights to fascism, poverty to the importance of the arts.

North Coast Repertory Theatre artistic director David Ellenstein keeps the pace lively, though the text doesn’t lend itself to much moving around by either character.

James Sutorius (who won a San Diego Theatre Critics Circle award for his stellar performance as “The Father” at North Coast Rep, and has performed at The Old Globe, La Jolla Playhouse, and on Broadway), is superb as the Judge. He brings equal measures of condescension and deeply hidden compassion to the curmudgeonly old coot. It’s a finely nuanced, multi-layered characterization.

Emily Goss, trained at USC and the London Academy of Music and Dramatic Art, more than holds her own. Her Sarah is respectful but assertive, efficient and at times, fiery. She’s on a journey, too, a more unexpected one than her boss. Goss makes her a robust, estimable young woman who puts up with a lot, to learn a lot.

Although there’s a Cézanne in the 1830 main house, Biddle’s office is in what used to be the stable, in the chilly upper level that was once a hayloft (wonderfully detailed, cluttered office design by Marty Burnett). Eliza Benzoni’s costumes are period-appropriate. The filming and editing are excellently accomplished by Aaron Rumley.

On the surface, this play may seem like an odd choice for this fraught time in our history. But it’s instructive to take a look back at our history, and how a highly influential man, who was born and raised a Republican, came to radically change his viewpoints on people, policies and America. [I hope he’ll forgive me for splitting an infinitive].