“THE MAD ONES” streaming from Grossmont College 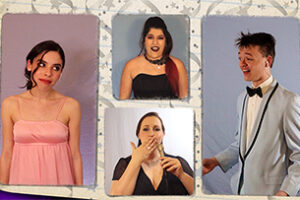 Samantha Brown had her life pretty much laid out for her when she was born. Follow the path of her accomplished, helicopter, statistician Mom: straight-A student to Ivy League college.

Now, Sam’s a senior in high school (the valedictorian, natch), and she has no idea what she wants. But she’d really like to be Free — of all the constraints and expectations and plans.

She wants to be “On the Road,” like her idol, Jack Kerouac, who said, “The only people for me are the mad ones: the ones who are mad to live, mad to talk, mad to be saved, desirous of everything at the same time.”

Sam wants to be one of the Mad Ones on the road. But she can’t even pass her driving test (three tries so far), she’s got a boyfriend but is still a virgin, and it’s really her best friend, Kelly, who’s got the pluck, impetuosity and daring to actually be a Mad One and do the Unexpected.

But Kelly’s… well, that’s all part of the story of the poignant 2017 musical, “The Mad Ones,” with book and lyrics by Kait Kerrigan and music by Brian Lowdermilk.

The Grossmont College Stagehouse Theatre is presenting an inventively filmed production starring talented students who are just the right age for the angsty piece, plus Gerilyn Brault, one of the Theatre Arts Department’s adjunct faculty, excellent as the overbearing mother.

Under the sharp direction of Geno Carr (also adjunct faculty), the energy is high, the singing is strong, the cast is thoroughly believable, and everyone learns a little something along the way.

Adelaida Martinez is adorable as Sam, stuck in her adopted car — and her life. As Kelly, Brittany Carrillo has just the right level of sparkle and spunk to convince Sam to flout the rules, cut class and take to the road. As the (underwritten) boyfriend, Adam, Cole Atencio displays a nerdy sweetness and a knockout high tenor/falsetto voice.

The harmonies of the three women are stunning; Krysten Hafso Koppman served as musical director, producer and mixer. The impressive production design, art direction and editing were by Michael McKeon.

The score is edgy and unpredictable, and the lyrics are often quite clever.

The musical has a lot to say about loss and grieving (and moving on), taking chances, listening to someone else’s needs, respecting your own, and finding your true self. Pitch-perfect for a youthful cast and audience.