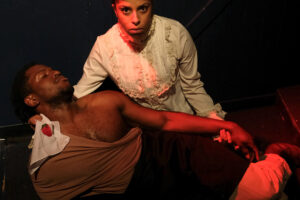 Over the centuries, Black Americans have made considerable progress… in some ways. But through generations, the Big Picture battles remain stubbornly the same: justice, equality, and educational, economic and social parity.

At the micro (couple) level, the problems become more universal: honesty, fidelity, commitment, betrayal — with the addition of race.

In her 1997 drama, “Harlem Duet,” Black Canadian playwright Djanet Sears turned a laser focus on one particular man and his relationship choices. The play has been called a prequel to “Othello,” viewed from the woman’s perspective. Sears subtitled it “A Rhapsodic Blues Tragedy.”

Setting her 20 scenes (ten per act) in three different eras, she toggles back and forth in time, tracing elements of Black American history — personal and social — as well as the evolution (and devolution) of a marriage, and the agonized emotional path of a jilted woman. In this version of the story, it is Billie who is destroyed by bitterness and jealousy. But Othello is also destroyed — by his own overreaching hubris.

In 1860, Othello is a slave and blacksmith on a Southern plantation, not long before the Emancipation Proclamation. He woos his first wife, Sybil (AKA Billie) by gifting her with his mother’s strawberry-embroidered handkerchief (a major plot-point in Shakespeare’s play). He refuses to escape to Canada with her, remaining instead with his white mistress, Miss Dessy (a variation of Shakespeare’s Desdemona). He meets a nasty end.

In 1928, during the Harlem Renaissance, Othello is an actor in his dressing-room. He claims to be one of the greats, who will never stoop to wearing blackface onstage (forced on some, chosen for Black minstrel shows by others, at the time). Othello proudly reveals that his white lover, Mona (another riff on Desdemona), is giving him the opportunity to play Shakespeare’s “Pericles, Prince of Tyre.” Things don’t go well for him, either.

In 1997, Othello and Billie, both academics, live in a brownstone at the Harlem intersection of Malcolm X and Martin Luther King Boulevards (125th St. and Lennox Ave.). After nine years of marriage, he’s just left her for a white colleague named Mona. Billie breaks down, becoming sick with grief, rage and plans for deadly revenge. Her given name, Sybil, means ‘seer of the future,’ a woman possessed with ‘prophetic fury.’ Billie studies herbs and potions and poisons, and she is determined to use them.

Sears takes an unflinching look at Black identity, striving, self-regard, marginalization, mental health, and interracial relationships. There are moments of humor, joy and poetry; a fierce intelligence courses through it all.

Once again, the Coronado Playhouse has embraced a bold challenge. As the company does for each production, it has chosen a pertinent Community Partner (recipient of donations).This time, it’s Rachel’s Women’s Center, which provides a safe, sober environment for self-help for women with few resources.

“Harlem Duet’s” director, Kandace Crystal, is artistic director of the American History Theatre and associate artistic director of Trinity Theatre Company. She’s embracing the social justice elements of the play, and fearlessly tackling multiple incendiary matters. Along with her production team, she’ll participate in a talkback with the San Diego Black Artist Collective during the run.

Crystal’s sensitivity to the issues and the characters is evident in her muscular, spirited direction of an impressive ensemble.

As Billie, Danielle Bunch (a recent Texas transplant with a BFA in Theater Performance from the University of Houston), shows a range of textures and emotions as she veers from affection to depression, hopelessness to bitterness, anger to madness.

Malachi Beasley (a graduate of Cal State Long Beach, currently pursuing a Master’s degree at the Yale School of Drama) is excellent as Othello, a hunky, tone-deaf, misguided amalgam of machismo, bravado and entitlement.

The forceful, compelling production is effectively filmed (Mark Akiyama, Landon Akiyama) on the Coronado Theatre stage (marred only by a few jerky camera moves and rapidly shifting lighting towards the end).

The sets and costumes are nicely suggestive for the three eras and locales (Dennis Floyd, set design; Beonica Bullard, costume design). The scenes are interspersed with audio clips that contextualize the action. We hear the voices of civil rights icons Martin Luther King, Jr., Malcolm X, and Paul Robeson; even pertinent clips from the OJ Simpson trial. It’s made painfully clear that racial oppression at every age has continued to undermine Black men and women, and their relationships.

“I am not my skin. My skin is not me,” 20th century Othello protests. Those words may have been spoken four centuries ago, or 100 years ago, or 20 — or yesterday. So many people have yet to listen. It’s a broad-based lesson our country has yet to learn.