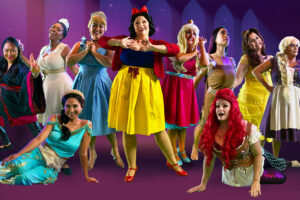 In these crazy pandemic times, is it possible to safely film a musical with ten performers?

It is if you’re a small, nimble community theater — OB Playhouse in Ocean Beach — with funds provided exclusively by friends and family. And you take every possible safety precaution.

For co-founder/executive producer Bill Connard, mounting “Disenchanted” was a painstaking, multi-stage process that, he says, put his theater “ahead of the curve.”

First, the three-piece band (under the musical direction of Kirk Valles), masked and socially distanced, laid down a track of the score.

Then, one by one, the all-female cast was brought in to record their solos and choral parts in the theater, with a new, high-end ventilation system in place.

Finally, the theater stage was painted green and appropriate green-screen backgrounds (drawn by Sarah Ah Sing) were provided for each of the Disney princesses, who lip-synched their singing performance and choreography individually.

With meticulous, laborious editing (95% by Connard; the rest by Carleton Torpin), all the parts came together so it actually looks like those women are in the same place at the same time, harmonizing and dancing together.

It’s an impressive feat. Not only that, but Connard is doing it four times over, in order to engage — and appeal to — different ages groups and demographics.

I saw the first incarnation, the Cougar Cast (i.e., mature women). The other casts are Millennials, College-Age and Gen Z (youth performers from the young Actors Theatre in Spring Valley).

“Disenchanted,” with book, music and lyrics by Dennis T. Giacino, developed with Fiely Natias (what? No female perspective??), features ten disgruntled Disney princesses whose “happily ever after” wasn’t.

One by one, and also en masse, they lament their hyper-sexualized clothing, obligatory voluptuousness, lack of dramatic agency and most galling, their primary raison d’être: waiting for a Prince to make their lives complete.

Only Mulan doesn’t “get the guy,” and she wonders why (“I might be lesbian” — gratuitous, and lamely put. Turns out, she is. Though why/how she’s pregnant is anyone’s guess).

Sleeping Beauty (in this cast, played by OBPH co-founder/artistic director Jennie Gray Connard) is decidedly narcoleptic, and The Little Mermaid regrets “giving up the seas… for these” (her legs).

The Princess Who Kissed the Frog (she doesn’t even merit a name) is glad that storybook princesses “finally went black …  the first Nubian Queen up on the screen”). But she can’t imagine why it took so long.

Pocahontas is annoyed that her story wasn’t told honestly (“Does anyone believe I kissed John Smith?”). And Princess Badroulbadour who was conveniently and pronounceably renamed Jasmine for “Aladdin,” is miffed that “the men have all the fun” in her “1001 Nights” remake.

Oddly, Snow White never mentions the dwarves, and Belle (from “Beauty and the Beast”), who feels trapped talking to inanimate objects, never resents being called “strange” because she likes to read books.

So, all told, pretty much what you’d expect these hapless gals to say. The fairy tale princesses actually had more interestingly miserable second acts in the Stephen Sondheim/James Lapine musical, “Into the Woods.” (This show came about nearly three decades later, in 2014).

But there are some clever lines, the Cougar cast is game and vocally talented, and director/choreographer Chrissy Burns (who brings her big voice to Snow White) gives them all fun moves and poses.

The sometimes snarky musical provides frothy, tongue-in-cheek fun. But the loudest applause should go to the creativity of OB Playhouse in bringing it to life.

The plan is for two more virtual, filmed musicals coming up in 2021: the two-hander, “The Last Five Years” and the full-scale “Urinetown, which OBPH produced in 2017 — with a cast of 32! I’ll be looking forward to seeing how that turns out, pandemic-style.