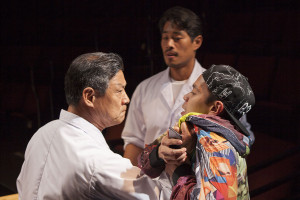 Sushi-making, like many Japanese activities – from origami to ikebana – is a matter of tradition and perfection. Ritual and ceremony.

So, Sushi Koji, formerly a highly regarded eatery, is strictly adhering to the old ways. The flip-side of Koji’s insistence on flawless convention is rigidity and inflexibility about trying anything new or changing with the times. Business is flailing and a slick new sushi place, part of a restaurant chain, has just opened across the street; folks are lining up around the block.

Koji watches them doing two unspeakable things: serving dessert and hiring women. Craftsmanship vs commercialism is a potent theme in Kimber Lee’s muted, slow-paced “tokyo fish story,” which premiered last year at South Coast Rep. Also on the menu is the question of whether acquiring an artform is all technique or involves some element of innate talent.

A good deal of the quiet, pause-filled play is predictable. We know Koji will be forced, by age, time and circumstance, to give way to the next generation. We know the young pseudo Goth-girl will be allowed into the inner sanctum. And we can guess some of the source of Koji’s guilt and regret.

And yet, the characters and their relationships are intriguing, and wonderfully portrayed. There’s humor in the hip-hop jargon-speaking Millennial, the antithesis of Koji’s stringent formality. Wedged between the two, and between the past and the future, is Koji’s self-effacing but gifted son, a sushi-master in his own right, relentlessly subservient to his father. The other characters are serious, comical or ethereal.

There’s something of a microcosm of Japanese society in this confined kitchen, which is rather open and spotless on The Old Globe’s arena stage, for a supposedly “dingy and declining restaurant.”

The music and sound are outstanding: every possible cooking and prep noise is mimed and designed, to magical effect. Director May Adrales and her crack team create an environment we can totally believe in, even when it’s a dreamscape.

Kimber Lee has an excellent ear for language and its musicality. Many of her images are beautiful, poetic and spare, the dramatic equivalent of haiku – or sushi.