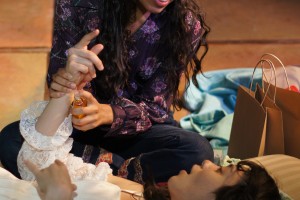 Summer is typically a time for lightweight musicals and other fluffy onstage fare. But that’s not how ion theatre plays it. They go for the dark, the dysfunctional, the disturbing and intense. If you’re up for that, you’ll be richly rewarded by “Lydia,” one of their deepest, darkest dramatic journeys, superbly enacted.

The 2008 drama by Octavio Solis is also filled with beautiful, poetic imagery, most of it spoken in the poignant fantasy life of a young girl in a near-vegetative state, the result of a car accident just before her quinceañera.

It’s the 1970s in Texas bordertown, El Paso. The Mexican-American Flores family is trying to maintain their slippery hold on some semblance of the American Dream. Dad is a short-fused short-order cook. Mom just went back to work as a clerk for the city, having spent two years at home, caring for Ceci. Now, she’s hired a maid, Lydia, an undocumented orphan from a small Mexican village. Lydia has an immediate and uncanny connection to Ceci.

All the men in the family – the rough, grunting father and both his poetic and his wayward sons – are drawn to Lydia, an enigmatic catalyst who manages to bring sexuality, understanding and healing to all of the damaged, guilty, shamed Flores familia.

Lydia’s backstory remains opaque, but in some supernatural way, she’s able to plug into the deepest, secret hopes, fears and dreams of each of the other characters. “She touched me, and I flew,” Ceci exclaims, “soaring into the blues of memory.”

ion founding artistic director Claudio Raygoza, who has both directed and designed, helms a magnificent ensemble, each wounded character brought vibrantly alive. Among the seven expert performers, Jennifer Paredes deserves special mention for her mesmerizing duality, curled into herself for the paralyzed, brain-damaged exterior that pulses with a free, lyrical, sensual inner life.

The lighting is as moody and otherworldly as the provocative piece itself. Like every character in the play, you’ll be touched to the core by what transpires and unfolds. Embrace the ferocity.