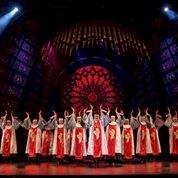 The relationship between film and theater is long but rocky. Though screen-stage adaptations move in both directions, they are not consistently successful. For every Tony-winning “Kinky Boots” and “The Full Monty,” musicals made from non-musical films, there are clunkers like “Rent” or Jersey Boys” that didn’t make the transition from stage to screen.

Put “Sister Act” in the ‘Success’ column. The 1992 movie, which starred former San Diegans Whoopi Goldberg and Kathy Najimi, used known, pre-recorded songs, with additional music written by Marc Shaiman (later to become a Tony-winner for “Hairspray,” another musical success story from a non-musical, that made a pretty decent movie musical).

For the stage musical of “Sister Act,” which premiered at the Pasadena Playhouse in 2006 and opened on Broadway in 2011, Disney turned to its favorite musical composer, Alan Menken (“Beauty and the Beast,” “The Little Mermaid,” “Aladdin”), who created the music (with lyricist Glenn Slater); Bill and Sheri Steinkellner wrote the book, with additional material by Tony-nominated playwright Douglas Carter Beane).

In the tough neighborhoods of Philadelphia, 1978, Deloris Van Cartier (a wannabe-star singer with a glitzy-sounding stage name) performs in the nightclub owned by her gangster boyfriend, Curtis Shank (robust-voiced Rufus Bonds, Jr.), who thinks he owns her, too.

After he gives her a present of a fluffy blue fur jacket (with his wife’s name in it!), she decides to leave him and strike out on her own, to be “Fabulous, Baby!” But before she can get away, she walks in on Curtis and sees him shoot down a suspected “squealer.”

Deloris flees, knowing that Curtis will go after her next. She runs to a police station, where she reconnects with Eddie, the desk chief, whom she knew in high school, and called “Sweaty Eddie” (endearing Cornelius Jones, Jr.). Harboring a crush all these years, Eddie still sweats when he’s near her. Now, he knows how valuable she is to bringing Curtis down, so he puts her in witness protection, hiding her in a place Curtis would never look: a convent. (of course, Curtis tracks her down there – or where would the conflict and suspense be??).

Predictably, Deloris chafes at the constrictive rules and butts heads with the hidebound Mother Superior (stalwart, vocally forceful Victoria Strong). To curb her wayward ways, Deloris is put in charge of the pathetic-sounding choir in this failing church – and she turns it into a rockin’ gospel glitz-and-glam show that saves the convent from closure. Along the way, she bonds tightly with jovial Sister Mary Patrick (upbeat Bethany Slomka), mousey Sister Mary Robert (delightful; Sarah Errington) and wizened, wise-cracky Sister Mary Lazarus (deadpan-funny Susan Stuber).

At Moonlight Stage Productions, the sets and sparkly costumes are rented, the singing and dancing are expert (under the assured guidance of director/choreographer John Vaughan), and the humor is sharp. Musical director Lyndon Pugeda conducts a fine 16-piece orchestra.

As Deloris, Daebreon Poiema has a terrific set of pipes – and she handles the humor well, though her dance moves are a bit repetitive. The gangster sidekicks (Greg Nicholas, Gerardo Flores-Tonella and Edred Utomi) are amusing, and Jim Chovick does a twinkle-eyed turn as the Monsignor who protects Deloris and genuinely relishes the Sister Act.

This is a high-spirited (quasi-spiritual) opener to Moonlight’s 36th season under the stars – always a convivial way to spend a summer evening.