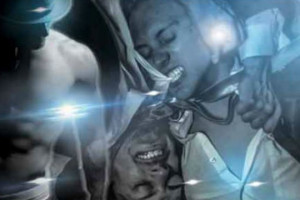 There’s theatrical and there’s meta-theatrical (self-referential). But what do you call meta to the max? Um, that would be “The Twentieth Century Way,” by Tom Jacobson, having a brief local premiere at ion theatre, as part of its Off-the-Radar series.

As the program cover helpfully informs us, “In 1914 Long Beach, actors were hired by police officers to entrap gay men. In 2014, it was still happening.”

The play’s title refers to a particular “perversion” (the “oral vice”) engaged in by homosexuals. In 1915, oral sex officially became a crime — a felony — in California, punishable by a prison term of up to 15 years.

“Actors changed the world,” boasts one character, about entrapping gay men at $15 a head.

So, amid the innumerable historical factoids and gay behavior descriptions, the setup is two (probably modern-day) actors, waiting to audition for a film role as a “confidence man,” in a conveniently prop-and-costume-filled room. While they wait, one (Warren, played by Richard Johnson) proposes a little friendly improvisational competition: “the better actor wins the right to stay and audition.”

And then, the meta-madness begins, as the actors slip in and out of a dizzying array of characters and accents, until poor Brown (Colton Iverson, the younger and more naïve of the two) doesn’t know whether he’s coming or going, playing, acting or being entrapped himself.

To Warren, all life is improvisational, and all acting is a lie (“I only lie to expose the truth,” he says, to further confuse Brown – and the audience). Ultimately, after Shakespeare scenes, Germans and Scots, cops and “pervs,” they literally strip down to the naked truth. Or is it?

What seems fascinating at first, and a dazzling display of chameleon characterization, becomes, even in a fleet 85 minutes, exhausting. The deadly fun of “Sleuth” this isn’t.

But it is a marvelous actor showcase, and except for a few minor accept slips, Johnson and Iverson are certainly up to the task; the speed of their hat-scarf-physical-verbal transformations is head-spinning.

As always, Claudio Raygoza’s direction and design are impressively detailed and precise. It’s the play that bogs down, in its own history and exposition and self-congratulatory tone. But for awhile (and especially for a Pride Month offering), it’s great fun – and highly informative – about a less enlightened time than ours (or is it?).