“MACBETH” at The Old Globe 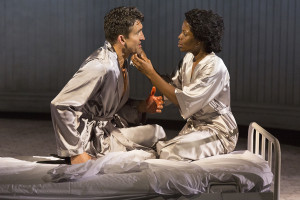 In an effort to enhance, re-set or deconstruct Shakespeare’s plays, concept often overrides the spirit, the story or the poetry. So it is with the current production of “Macbeth” at The Old Globe.

Nothing about it feels Scottish, but there is a great deal of red – on the oddly circular floor; in a shower-curtain-like affair that’s pulled, ever so slowly, across the curved rear wall of the set; and in the lighting, every time a death occurs – which in this bloody tragedy of ruthless power-mongering, is pretty often.

There’s also a lifesize, puppet-like doll that stands in for Macduff’s son, whose poignant, plaintive questions to his mother, moments before their savage murder, are unaccountably voiced by Macbeth, as he slowly circles the stage, just as his wife did earlier with that curtain.

The setting suggests World War I, with somber gray-blue uniforms and long bulky coats. The heavily bandaged witches reside in a military hospital, though in the second half, they’re chained and straitjacketed like asylum inmates.

British actor Jonathan Cake makes for a potent, if not always nuanced Macbeth. Some of his line readings are unpredictable; others, inexplicable. As his wife, Marsha Stephanie Blake is not up to the daunting task – neither in language nor physicality; there’s a decidedly 21st century vibe in her casual American stance, gait and speech. Their connection is palpably sexual, though. Her stage-circling sleepwalking scene is her best.

It appears that there’s just too much going on in director Brian Kulick’s head – as well as on his stage – to make this a coherent production. Still, there’s strong work by the ensemble, especially Timothy Stickney as the stalwart Banquo, who is compelling as witness to the witches’ prophesies and posthumous ghost that haunts the king-killing, guilt-ridden Macbeth. The sound design tends toward the ear-splitting, and most of the attempts at humor are either inept or ineffectual.

In sum, too much shtick, not enough substance. Macbeth deserves better.