“SUNDAY IN THE PARK WITH GEORGE” from ion theatre 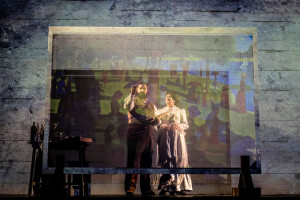 VENUE: ion theatre at the San Diego Museum of Art

“Art isn’t easy.” That’s a lyric, and the through-line, in Stephen Sondheim’s audacious 1984 musical, “Sunday in the Park with George.” It also applies to the audacity of tiny ion theatre in undertaking this massive project – in a delightfully apt collaboration with the San Diego Museum of Art, where the piece is staged.

The Pulitzer Prize-winning musical, one of the master’s masterworks, has never been professionally produced in San Diego. The show premiered exactly 100 years after the painting that inspired it: Georges Seurat’s 1884 pointillist magnum opus, “A Sunday Afternoon on the Island of La Grande Jatte.”

The show’s about what it takes – and what it costs – to be an artist. The obsessive dedication to the work, which results in isolation and alienation.

The tricky structure of the show, with book by James Lapine, sets the first act in the 1880s, focused on Seurat and his lover, the delectable, illiterate, cleverly-named Dot. The real Seurat had a lover, Madeleine, but no daughter and no great-grandchildren.

The second act, in 1980s America, features Seurat’s fictional great-grandson, George, also an artist struggling with color, light, relationship – and a desire to create something new and important. Sondheim’s brilliant observations on the creative process are deeply moving.

Ironically, ion’s potent production flips expectations: here, the second act is more sharply focused than the first, where the characters and their connections are not as clearly delineated.

Jon Lorenz, the taciturn Seurat in the first act, seems to be stretched beyond his vocal range. But he comes alive in 20th century Act 2, where the ensemble also seems more comfortable.

Melissa Fernandes is sensational throughout. This is her show, as the fiery Dot and then her feisty, 98 year-old daughter, Marie, who encourages George, a laser-sculptor, to revisit the family tradition. Marvelous projections and wonderful piano accompaniment by musical director Mark Danisovszky enhance the production.

Co-directors Glenn Paris and Kim Strassburger have marshaled a very talented cast, but Act I feels a little too languid, and we lose track of the clandestine connections. But when the cast assembles itself as the Seurat painting, it’s a thrilling moment of theater.