“THE COMPLETE HISTORY OF THEATER (ABRIDGED)” at Point Loma Playhouse 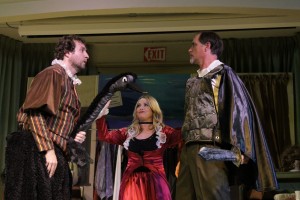 New company status, new play – and an off-the-wall look at where it all came from.

There’s a whole lotta silly going on in “The Complete History of Theatre (Abridged),” written and directed by Matt Thompson, artistic director of the newly non-profit and professional Point Loma Playhouse.

The loopy proceedings are hosted by three theatrical luminaries, who call themselves “an iconic trifecta of the dramatic world”: the influential Russian director Konstantin Stanislavski, who spawned ‘Method Acting’; the ultimate diva and most famous actor of the 19th century, Sarah Bernhardt; and a doofus William Shakespeare, who inexplicably misuses and misapprehends words.

In addition to the three malleable actors inhabiting these infighting, attention-seeking characters, one chameleon plays ten behind-the-scenes indispensables, from the producer to the stagehand. Steve Smith gets the quick-change flexibility nod for this production.

In only 90 minutes, including an intermission, we get more of the trio’s overblown and often irritating personalities than we do of the promised history. There is a ton of didactic detail, though. Comic gems and in-jokes get buried within the information overload. And Shakespeare complains about Stanislavski’s “pedantic rhetoric!”

Add in the juggling, the dummy and the audience participation, and you have a surfeit of absurdity.

But then, in the second act, theater magic happens, as the troupe makes their lightning-fast way through thousands of years of playwrights, from Aeschylus to Albee, Ionesco to Woody Allen, Strindberg to Sondheim,  Ibsen to August Wilson. This laugh-out-loud segment is worth the price of admission. The Pinter bit is hilarious; and Tom Steward is side-splitting with his speed-demon speech in patter songs and other motor-mouth setups. John Tessmer and Hilary White provide plenty of merriment, too.

So, if you’re sitting there, thinking, ‘Where are the guffaws I expected?,’ wait for Act 2… if you know anything about theater, you might just die laughing.