“to the yellow house” at La Jolla Playhouse 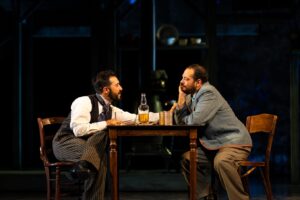 Innumerable explorations and representations of his life have given rise to diverse explanations of the artist’s famously erratic, aggressive and often self-sabotaging behavior.

Theories about the cause of his unstable mental and physical health include bipolar disease, porphyria (a blood disorder with psychiatric manifestations), temporal lobe epilepsy and syphilis.

Playwright Kimber Lee has had two prior works shown in San Diego: “tokyo fish story” at The Old Globe (2016) and “Brownsville Song (b-side for Tray)” at Moxie Theatre (2016), which had a reading at the Globe in 2015), both of which were inventive in style, form and imagination.

For her latest, “to the yellow house” (she has a penchant for lower-case letters in her play titles), having its world premiere at the La Jolla Playhouse, she was inspired by the comprehensive 2011 biography, “van Gogh: The Life,” by Steven Naifeh and Gregory White Smith.

Ten years in the making, that doorstop tome was filled with newly-discovered details from previously unpublished letters and other source material. Up until then, all we knew about Vincent’s mind and thought was in the weekly letters he and his younger brother, Theo, exchanged.

Among the many revelations in the book was a highly provocative one that has gained traction in the ensuing years: the authors asserted (and weapons experts have confirmed) that the gunshot wound that killed van Gogh could not have been self-inflicted; he had to have been a victim of accidental manslaughter or foul play. That new information doesn’t find its way into this new play, though it does feature in the films “Loving Vincent” (2017) and “At Eternity’s Gate” (2018). Yet in her interviews, Lee has continued to refer to van Gogh’s death (at age 37) as a suicide.

The years depicted in the play are primarily 1886-1888 in Paris, with some scenes set in the spring of 1888, when Vincent moved to Arles, hoping to establish an artists’ community, a Provençal “studio of the South.” When he found the yellow house of the title, he set it up for himself and fellow artist Paul Gaugin. That arrangement didn’t work out so well. But that’s another story for another play.

Like the other drawings and painting mentioned in Lee’s creation (e.g., “The Potato-Eaters”), we never get to see his depiction of the yellow house, or any actual images of Vincent’s work. The playwright and director (Neel Keller, former associate artistic director at the Playhouse) have explained that they wanted to “stay away from the paintings,” avoiding “fakes that don’t look real.” They wanted “the audience to use its imagination.”

But, to talk about and learn about the life, work and hard times of Vincent van Gogh and not to see his creations, assumes a lot from the audience and does a disservice to the artist. Unlike his celebrated images of sunflowers and irises, van Gogh’s dark drawings and sketches of the Paris years are not well known.

The basic premise of this long, overstuffed piece sems to be that no matter how many times and in how many ways Vincent met with failure (as a missionary, an art student, an art dealer — all barely mentioned), he always forged on, convinced of his unique vision and his need and ability to communicate something important.

That’s a potentially profound pursuit. But we never learn what made Vincent the kind of person who has so much credence in himself and what he has to say that he can ignore a mountain of rejection and negativity, and continue to do something that was distinctive, iconoclastic and very much out of the mainstream. We need to know not just that he did it but why and how, and what drove him. That would be useful information for us all.

When he was denigrated as a poor draftsman in the atelier of Fernand Cormon (whose other students included Henri de Toulouse-Lautrec and Émile Bernard), Vincent was instructed to draw “only what you see,” which he simply couldn’t do. He was evicted.

van Gogh had an extraordinarily difficult life, rejected even by his parents. There’s a titillating allusion to a letter from his mother, apparently horrific and debasing, but what she said is never revealed by Vincent or Theo in their brief conversation here.

As a fellow theatergoer aptly suggested, the piece, like a fine sauce, needs a reduction, to be boiled down to its essence.

That would mean, instead of a sprawling, slow-moving, near three-hour opus and a cast of 13, most playing ancillary or secondary characters, the play could be a much more tight, intimate affair. Perhaps a three or four-hander, focused on the most seminal, tumultuous Paris relationships: Vincent and Theo, Vincent and the lusty, strong-willed innkeeper/prostitute Agostina Segatori, proto-feminist proprietor of the Café du Tambourin. Perhaps one other actor could portray a variety of secondary figures in his life at that time.

Lee’s van Gogh is something of a jerk. He has a volatile, pugnacious personality, and his explosive behavior consistently annihilates his relationships and opportunities. (Perhaps some of this was due to his medical, as much as his emotional, problems, but there’s no evidence of that here).

In this play and production, there is too much going on. Too many unnecessary side-stories (like the dalliance between the baker Sophie and the artist Bernard), too much fussy direction, with tables and chairs being repeatedly and needlessly moved on and off the stage.

The scenic design (Takeshi Kata) is fascinating and flexible, and the effects, including a highly textured backdrop that undulates, are suggestive of van Gogh’s work. There are flying frames, but they don’t, alas, contain the master’s early work.

The lighting (Masha Tsimring) is highly effective, The costumes (David Israel Reynoso) are lovely, especially for the women, and the music composition (Justin Ellington) is period-perfect, reminiscent of the piano stylings of Erik Satie.

The cast is excellent, especially Paco Tolson as a hot-headed, pitiful but not-very-likable Vincent; Frankie J. Alvarez as a frustrated, exasperated Theo, who unfailingly supports his brother’s financial privations, but notably not his art; Deirdrie Henry, formidable as Agostina; Brooke Ishibashi, flirtatious and industrious as Sophie.

Marco Barricelli provides comic relief in this generally dark-hued piece, as the narcissistic, shallow and condescending mentor/guru, Cormon (among other roles). Alton Alburo plays Henri (whose last name, Toulouse-Lautrec, is never mentioned) and DeLeon Dallas is Bernard (whose first name, Émile, is never spoken). The six-member Ensemble of UC San Diego MFA candidates acquits themselves well, although they really don’t have all that much to do.

There’s some lovely language in the text, and a bit of banter about art technique, though more would be better, given the genre-defying creations yet to come from Vincent’s pen and brush.

A re-configuration and consolidation would really tighten up this ambitious new work and render it more pointed and provocative.