“FOR WHOM THE SOUTHERN BELLE TOLLS” from The Roustabouts Theatre Co. 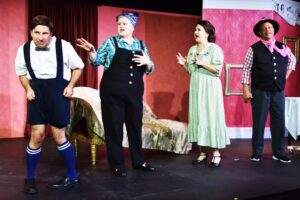 These days, everyone could use a good laugh, that’s for sure.

But not everyone finds the same things funny.

Playwright Christopher Durang is something of an acquired taste. His works are equal parts silly and cynical, smart and snarky, absurdist, campy, over-the-top and fatalistic.

All of the above are on display in his 1994 evening of short plays (somewhat akin to SNL sketch comedy), “For Whom the Southern Belle Tolls.” The title alone is worth the price of admission.

The five year-old Roustabouts Theatre Co. is always up for a good time  — and a good think. Prepare for a lot more of the former here.

You don’t have to have a cultural or literature degree to see these four playlets, each of which features several laugh-out-loud moments. But there is a great deal of name-dropping and plenty of arcane references, literary and otherwise.

As for the title piece, you don’t have to have intimate knowledge of Tennessee Williams’s classic, “The Glass Menagerie,” but some familiarity would make it a lot funnier for you.

Third in the lineup, but a good place to start this discussion, it’s a parody that quotes and twists lines from the original play, and takes lots of liberties, too — especially of the gender/sexuality variety.

The dysfunctional Wingfield family has been re-conceived as the Wingvalleys. Domineering Mama, Amanda (pitch-perfect Wendy Waddell) still wants her adult children to grow up and be happy, but mostly, she wants them gone — so she can retrieve her long-gone Southern belle ways.

“I hate my life,” she says — a running theme throughout the evening.

She demeans Tom (Walter Murray, slightly flamboyant as the family breadwinner) for his nightly escape to the movies, after which he often brings home a stray sailor.

Instead of Williams’s fragile Laura, who collects equally fragile glass animals, we get Lawrence (heartbreaking and comical Omri Schein), who refuses to leave the house because of his limp, asthma and eczema. His mother calls him “retarded,” and belittles him as a hypochondriac. Terrified of the outside world, he fawns over his collection of cocktail swizzle sticks, which he lovingly, if not imaginatively, gives names (“I call this one Blue… because it’s blue”).

Tonight, Tom has brought home from the factory a “feminine caller” (funny Wendy Maples), a tough-looking, loud-talking, hard of hearing but affable gal who turns out to be a lesbian. Lame jokes based on mis-hearing/misunderstanding abound.

(Political Correctness does not make an appearance in these plays; the theater helpfully cautions that “some language may be considered offensive/insensitive/triggering.” Consider yourself forewarned).

Family relations go significantly downhill from the various revelations. But the parody, like the performances, is superb (if a tad repetitive, a recurring flaw in the series).

The other long-ish piece is the first, “Wanda’s Visit,” about an overly acquiescent wife and an overly passive husband (Waddell and Murray, both excellent), who are in a rut of tedium in their 13-year marriage.

Their adrenaline-shot takes the form of a disruptive and interminable visit from loud-mouthed, aggressive/intrusive Wanda (Maples, loud again, and hilarious), the husband’s long-ago high school prom date who descends on them from her miserable, admittedly promiscuous life.

At a dinner out (with agile, clownish Schein in multiple roles), events take an unexpected turn, and the couple returns with renewed vigor to their lackluster life.

Two other despondent characters take center stage in “Nina in the Morning” and “Business Lunch at the Russian Tea Room.”

Nina is a “Sunset Boulevard”-type faded star (Waddell, a narcissist in a glamourous red gown), also confessing to a life of promiscuity … and a falling facelift. Her manservant (Maples as stony-faced sadist), who used to be a dentist, wields a hypodermic to anesthetize Nina’s hate-filled offspring (both played by Murray). “I always like my children best unconscious,” Nina confesses.

Schein narrates in a German accent, while also playing “Lance, the handsome chauffeur.” References to the likes of Simone Signoret and Antoine de Saint-Exupéry follow, as the action fades out.

Then there’s the one about the playwright named Chris, like his creator, who also spent 12 years in Catholic school (Murray, weak-willed and zhlubby in glasses and cardigan), who just wants to be left alone with his typewriter and his unfolded laundry.

In “Business Lunch at the Russian Tea Room,” he’s forced by his overbearing New York/aggressive agent (blonde-bewigged Schein) into the titular high-class, historic resto, with a Hollywood exec who pitches him the most ludicrous story ideas, finally settling on an Irish priest and an orthodox Rabbi (“baptism versus bris,” thinks Chris), who fall in love.

“Kind of like Sleeping with the Enemy in Seattle,” the Hollywood monster explains, while pointedly mentioning her close personal relationships with Philip Roth, Gus van Zant, Nora Ephron, etc.

Hollywood’s inanity and insanity are an easy target, especially for a playwright, but this cast (with Schein also playing a surly, borscht-serving waiter) takes aim with precision.

Frankly, this is an actor’s more than a writer’s showcase, and skillful director Phil Johnson (Roustabouts co-founder and artistic director) has assembled a stellar ensemble.

The design is fun, too, and more timely — pink flocked wallpaper peels down to reveal photos of more easy targets: the CEOs of Google, Amazon and Tesla; Supreme Court Justice Cavanaugh and other hair-raising current name-drops (scenic design by Alyssa Kane). The set changes are cleverly directed, accompanied by pertinent numbers like Tom Lehrer’s “Masochism Tango” and Cole Porter’s “Let’s Misbehave” (sound by Jon Fredette). The costumes (Renetta Lloyd and Roslyn Lehman) are delectable, too.

It’s all intended as a post- (we hope) pandemic diversion. So, If this seems like your cup of comedy, mask up and enjoy.