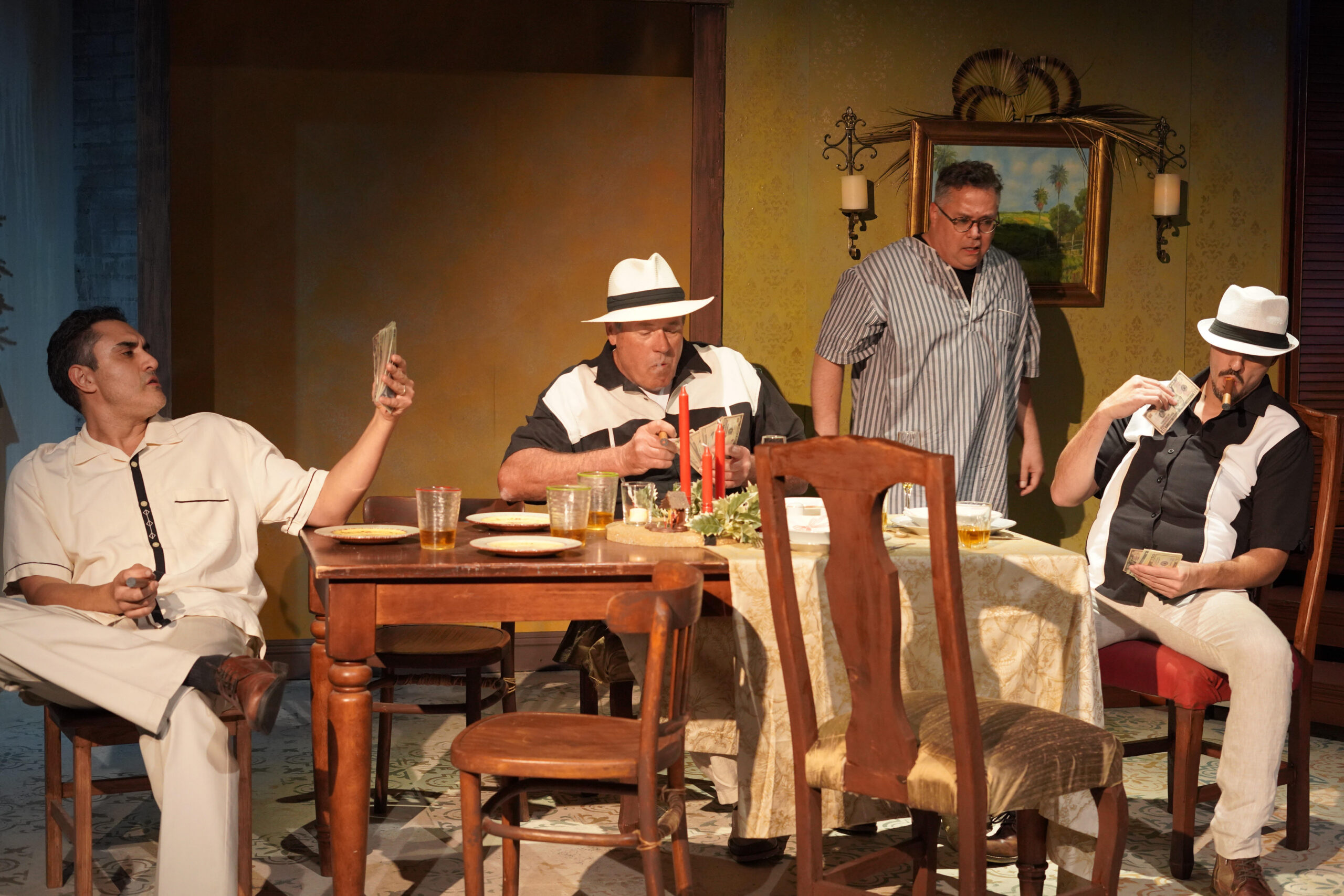 Can a person find redemption? Can a country?

The former forms the spine of Charles Dickens’ 1843 classic, “A Christmas Carol.” The latter question is at the heart of Herbert Sigüenza’s “A People’s Cuban Christmas Tale,” having its world premiere at OnStage Playhouse in Chula Vista.

In his Playwright’s Note in the digital program, Sigüenza, co-founder of the acclaimed Latino comedy troupe, Culture Clash, and resident playwright at the San Diego Repertory Theatre, calls himself “unapologetically a Democratic Socialist.”  In his play, he wastes no time telling us that his Scrooge and Marley, American sugar exporters since 1886 (“sugar barons,” in his conception) are “kings of human exploitation.”

Like Dickens before him in England, Sigüenza (San Francisco-born but of Salvadoran descent) is deeply concerned about the socio-economic disparities of his age.

Hewing close in the structure and plot (even borrowing certain lines) of the Dickens original, Sigüenza sets his tale in Havana. The Ghosts (espiritus) of his Scrooge are Cuba Past, Present and Future.

By showing moments from Scrooge’s early and prospective life, they teach him (and us) a great deal about Cuba’s history, and remind us that “there is always an alternative to greed.”

“We must,” Siguenza asserts, including the U.S. in his program note, “find a drastic change within ourselves and our systems, to survive the next century.”

Though the history lessons sometimes lean toward the didactic, we hear some of Marti’s lyrical, potent poetry, learn about the Mafia’s exploitative control of Havana casinos and hotels, and get a sense of the Cuban factions that revere or revile Fidel Castro and Ché Guevara. But Sigüenza never loses sight of the notion that personal change, in the aggregate, can effect societal change.

Richard P. Trujillo, an Equity actor and artistic director of the San Diego School of Creative and Performing Arts, is wonderfully curmudgeonly as Ezequiel Scrooge (a condescending American who keeps correcting his heavily accented Cuban subordinates that his name is pronounced “Scrooge with an S, not Es-scrooge with an E”). He’s also delightfully joyful and magnanimous after his transformation.

Spanish is sprinkled in throughout the piece (deftly explained or translated), including an array of traditional Cuban and Afro-Cuban songs, thanks to percussionist Juan Carlos Blanco, a Havana native and master Afro-Cuban dancer/drummer/choreographer, and the rich-voiced Angelica Cardona, a singer/percussionist/dancer with Omo Aché Afro Cuban Music and Dance Company and lead vocalist in a Cuban band.

Javier Guerrero, who wonderfully portrays Scrooge’s ill-treated employee, Roberto Cruz (a Spanish riff on Bob Cratchit), as well as Young Man Scrooge, also sits in with the band on guitar.

OnStage artistic director James P. Darvas directs with imagination and aplomb; despite the need for frequent locale and time changes, he keeps the action moving swiftly and seamlessly.

The set (Duane McGregor) offers a flexible four playing spaces, enhanced by effective lighting (Leviticus Padilla) and sound (Kate McLeod). The costumes (Natalia Arazia) are cleverly designed for the many quick changes, as everyone but Trujillo portrays a number of characters.

It all makes for an entertaining, educational and sometimes politically provocative take on a holiday standard. An intriguing new twist on an old favorite.