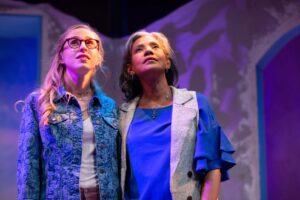 What are the odds? Two Cuba-set plays in one week. About Castro and the Cuban Revolution and its aftermath. With Cuban music.

Much of CQ’s 2019 play (which premiered at the Southern Rep Theatre in New Orleans) is set in New York, where we meet Yadra (marvelous, malleable Zuleyma Guevara, who also vibrantly plays herself in her youth, and believably becomes a much older, shuffling and muttering non-English-speaking woman who knew Yadra back in Cuba).

In a tense interaction early on, Yadra reveals to her daughter, Zelia, that she has closed her psychiatric practice due to a diagnosis of early-onset Alzheimer’s disease.

Her mother was always her rock, her inspiration (the family college graduate, not to mention medical school). She can’t imagine her mother in a weakened state, or even worse, a world without her

She takes refuge in the arms of her grounded, less volatile wife, Loré (Olivia Espinosa, excellent throughout, as Loré as well as Yadra’s beloved tia Nena).

Zelia has heard a lot about Nena, and the huge sacrifice she made, choosing to stay behind for Antonia when Yadra and her family left Cuba for the U.S.

Zelia is fascinated by that choice, by the huge discrepancy between her relatively unfettered married life in New York and the danger posed by Castro and his government toward myriad ‘others,’ including non-heterosexuals.

Meanwhile, as her mother’s mind and health rapidly deteriorate (brilliantly conveyed by Guevara), Zelia is forced to confront her own concerns about identity.

With her light skin, she feels that she isn’t “white enough or Latina enough”; she doesn’t fit comfortably in either milieu.

She has always wanted to go to Cuba with her mother, to see the sky, to meet the fabled aunt, to trace her roots, to have her mother re-live her memories. But that isn’t to be; she winds up going with Loré, with mixed results.

The 80-minute play is rife with issues, but there isn’t much deeply etched character development; we enjoy these characters, but we don’t really know them. Of greater concern, there’s no dramatic tension.

We get grief and guilt, Yadra’s immigrant experience of displacement and nostalgia, and Zelia’s desire to explore roots and learn firsthand the romantic story of the choice Nena made for love. There’s Yadra’s romanticized memories of sun-washed, blue-skied, starry Cuba vs. the reality Zelia finds when she finally gets there.

The pink and blue set (designed by Samantha Rojales), with its painted ocean lapping downstage and its blue-and-fluffy-white skies above, may be a dreamlike, fantasy conception of Cuba, but it doesn’t fit the New York scenes at all.

Cuban Spanish (different from Mexican Spanish, or the Spanish of Loré’s Puerto Rican background) is woven throughout the text, sometimes with little or no translation.

As a Spanish-language learner, I found that to be an enjoyable challenge, though it was clearly less so for those with limited knowledge of Spanish, like Zelia herself, whose mother raised her to be 100% English-speaking American.

The gist of the uninterpreted Spanish is generally comprehensible, but some of the details of Nena’s fraught existence under Castro and her ongoing relationship with Antonia (despite Antonia’s marriage to a man) remain hazy, and constitute the play’s only element of mystery.

These fine performances, in a play infused with ache and love, could be accentuated with increased emotional and dramatic stakes, and something of a payoff; that would make the piece considerably more compelling.