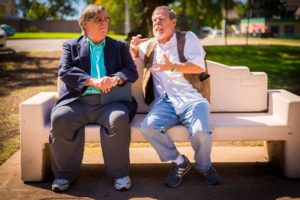 Watching “The Zoo Story” again after a number of years, it’s not hard to see why Edward Albee’s dramatic debut was such a game-changer.

When it opened in Greenwich Village, NY in 1960 (after a Berlin premiere two years earlier), it helped ignite the burgeoning Off Broadway theater scene.

The writing is so astute and precise, the characters so clearly etched, the 60-minute interaction between two men so unmistakable, the themes so piercing and existentially terrifying.

The one-act launched Albee’s career as a playwright (he went on to win three Pulitzer Prizes over his 50+ years in theater, before he died in 2016, at age 88).

About a dozen years ago, in an interview for the New York Times, Albee (pronounced ALL-bee, the first syllable rhyming with CALL; a frequent visitor to San Diego, he often noted how he loathed the AL-bee pronunciation (like CAL), and raced to correct anyone who used it) reported that he’d written the piece in two weeks, on a typewriter he “liberated” from the Western Union Company, where he worked at the time. He was not yet 30 when he finished, but when he was done, he admitted saying, “Okay, this is fairly original.”

He was so right.

The play remains as potent and provocative as ever: menacing at heart, but laced with Albee’s signature dark, cynical humor. It remains one of his most admired works.

In an innovative gambit, he wrote the play in Realistic style (these are two modern, credible, everyday men) but it’s Absurdist in philosophy (grappling with the ultimate meaninglessness of life).

On a sunny, pleasant Sunday in Central Park, casual-but-nicely-dressed Peter sits down on his favorite bench, puts a pipe in his mouth and opens a book. Within moments, the slightly more unkempt Jerry saunters over, and announces, “I’ve just been to the Zoo.”

Thus begins Jerry’s intense, systematic dismantling of every aspect of Peter’s privileged but empty life. Jerry is from a different educational and socioeconomic stratum than Peter, but he’s smart enough (referring to literature, using words like ‘antipathy’) and sharp enough to ask Peter very pointed and personal questions, and to totally dominate the interaction. He tells stories about his run-down rooming house and its inhabitants. holding Peter captive until he finally gets to the “zoo story” that was his opening tease.

The Zoo image is not random (nothing Albee ever wrote is). Besides Jerry’s visit, the zoo is symbolic: of the ‘bars’ and constraints behind which all of us are forced to live (family, job, laws, rules, etc.) as well as the dehumanization of Man, our barely concealed animal nature.

Albee is also toying with themes that run through all his works: alienation, isolation and loneliness, social class divisions, and miscommunication (or missed communication).

In “The Zoo Story,” what starts out as a chance encounter (or was it premeditated in some way?) turns into a deadly deconstruction of the American Dream. Albee said from the beginning of his career that he wanted to challenge audiences to feel uncomfortable. He succeeded, repeatedly.

San Diego Actors Theatre, founded and helmed by Patricia Elmore Costa, is celebrating its 32nd year  of creating site-specific productions. This one is particularly felicitous: it’s set in a lovely, grassy park in Mission Hills (a historic former cemetery dating back to the late 1800s). Elmore Costa has placed a metal park bench under a shady stand of leafy trees (folding chairs are provided; sand chairs or blankets are welcome).

Passersby paused to see what all the yelling was about (that was near the end; the conversation/confrontation is quite civil at the outset).

And it was something to see, a taut production with focused performances and detailed direction.

As Peter, Fred Harlow seems complacent and self-satisfied at first, reluctantly admitting to Jerry that he earns $200,000 as a publishing executive (a numerical update by Albee). But we watch as his life is questioned and his carefully controlled temper and temperament completely unravel. He acts like an infant, refusing to relinquish his beloved bench when Jerry demands it, and then, as Jerry predicted, he devolves enough to act like an animal – as much a shock to the character as to the audience.

As Jerry, Byron LaDue keeps up a steady stream of stories and colorful descriptions, apparently nonchalant but, we come to see, seething beneath the surface. All his life, he’s been an outsider looking in. All his attempts at relationship have failed – even, most recently, with a dog. This may be his last stab at it. He comes on gingerly, but soon asserts his dominance and territoriality over what seemed to be a more entitled beast in the human zoo.

In perhaps the finest performance I’ve seen from him, LaDue at first appears to be reasonable, if a bit eccentric and loquacious, a harmless drifter. But he becomes increasingly menacing, and frightening.

The play shows two facets of each character: the way he sees himself, and the way the other character sees him (Albee wasn’t satisfied with his initial description of Peter, and decades later, he went back and created a prequel to “The Zoo Story,” focusing on Peter and his wife. Most found it unnecessary).

This is a powerful production. Perhaps there could be a few more layers of character nuance, but the result is very satisfying – in that disturbing, unnerving way that Albee cherished.