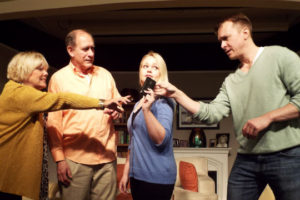 It’s hard to believe that this Joe DiPietro play was written only four years ago. It feels decidedly retro – in its humor and its sensibility. Many of the quips feels musty, and some lines show questionable taste and cultural sensitivity.

But there’s no quibble with the strong performances in the Point Loma Playhouse production.

In the first scene, Billy, who’s supposed to be 45 (otherwise thoroughly believable William Parker Shore looks a lot younger), reveals to his father that he’s in love with a 23 year old personal trainer, despite the fact that he and his wife (Melanie McCorkle, whose convincing performance belies her minimal stage experience) have recently had a baby.

Billy’s father, Bill (excellent Richard Rivera, whose face expresses layers of emotion) is beside himself. Alice, his smart, intuitive wife of many years (Dori Salois, a perfectly antic, meddling mother) will, Bill knows, extract the info from him, in spite of his promise to his son to keep the secret.

When Alice figures out what’s going on, she springs into action, and summons the young couple immediately. Confrontations, revelations and recriminations ensue. Alice gives an unexpected speech, the only unpredictable element in the play (you can see some of those punchlines coming a mile away).

Like other comic writing by DiPietro (“Over the River and Through the Woods”; the popular musical “I Love You, You’re Perfect, Now Change”), this play doesn’t run deep. And some folks may not feel that infidelity is something to joke about – though admittedly, the full-house audience the night I was there laughed their heads off.

Director Jerry Pilato (who also designed the attractive, functional set) keeps things credible, though there are times when the pace could be a tad livelier. The sound (Nick Webb), lighting (Kain Shepard and Gunnar Ramstrum) and costume design (Barbara Peterson) are effective.

If lightweight comedy with a bit of a bite is your cup of tea, “Clever Little Lies” will definitely go down easy.