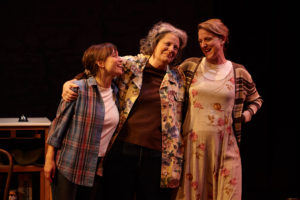 Down-home music and a feel-good story.
“The Spitfire Grill,” set in the tiny fictional Wisconsin town of Gilead, is a balm to the audience, as much as the central character is a balm to the hamlet and its inhabitants.
Recently released after five years in prison, Percy is seeking a new beginning. She sees an ad in a travel magazine and thinks she’s headed for Paradise.
But Gilead is a downtrodden place, having lost its biggest employer, the quarry. So men like Caleb are angry and dispirited. And Shelby, his wife, is beaten down and unhappy.
The Spitfire Grill, the only café in town, is run by surly, brittle Hannah, who harbors a long-held secret. So does the hermit in the woods.  Hannah’s been trying to sell the Grill for a decade.
Feisty Percy to the rescue. Though she’s guarded and defensive, she’ll help everyone to reveal and heal. She’ll even come up with a clever strategy to unload the Grill: a national lottery.
Caleb and the town busybody are skeptical. But the sheriff takes a shine to her.
The 2001 musical, based on the 1996 movie, is sweet and sentimental, but not too gooey, even though it has a happier ending than the film.
The country-twanged music, by James Valcq, and the sometimes imagistic lyrics of Fred Alley, celebrate the bounty of small-town life.
It’s all about redemption and second chances, forgiveness, hope and the power of female friendship.
The solid North Coast Repertory Theatre production boasts an effective and committed cast, who carve out credible characters. The singing is mostly strong, with Meghan Andrews’ lovely soprano a standout. As Shelby, her voice pairs nicely with the warm mezzo of Aurora Florence, a spitfire herself as Percy. Surprisingly, New York director Jeffrey B. Moss provides very little staging or movement during the songs, which makes them feel static.

The 4-piece band is excellent, under the direction of Alby Potts, with the cello especially noteworthy.  The set, lighting and sound add to the cozy, country feel.

There’s an old-fashioned sensibility to this musical, but it’s pleasant and poignant and well-produced.