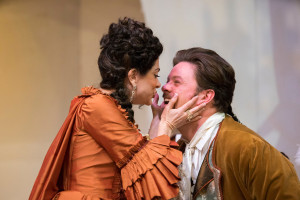 Not all of the Seven Deadly Sins are on display in “Les Liaisons Dangereuses,” but it sure seems like it. Okay, there’s no gluttony or sloth. But there’s plenty of lust, envy, pride and wrath to compensate.

Adapted by Christopher Hampton from the 1782 novel by Pierre Choderlos de Laclos, the play is a deliciously wicked piece of seduction and manipulation.

Two privileged, cynical aristocrats in 18th century Paris — rivals, accomplices and ex-lovers —  compete for revenge dalliances and other nefarious meddlings. They’re a vicious pair; separately and together, they gratify each other’s whims, gleefully corrupting, demeaning and destroying the relationships, happiness and chastity of others.

They sound awful – and they are – but they’re really quite irresistible. Their cruelty, lack of restraint and complete absence of compassion are nothing short of breathtaking.

The set is gilded and the costumes are opulent, befitting these extravagant characters.  Baird plays the Vicomte de Valmont as a damnably self-assured, supercilious libertine. Jessica John is his perfect counterpart, the Marquise de Merteuil, a beautiful, spiteful schemer who can’t bear the thought that she’s losing her grip – especially on the Viscomte, who, in fulfilling one of her evil undertakings, does the unthinkable and actually falls in love.

If you’ve seen the Glenn Close/John Malkovich film, this stage version ends a bit differently – but still, everyone’s been had – irreparably. In the face of this kind of deadly gamesmanship, tragedy, of course, is inevitable.

All the secondary characters are excellently portrayed, with special mention earned by Amanda Schaar, Terril Miller and Connor Sullivan.

Despite the vanity and venom of the proceedings, this production – sexy, ravishing and disarming – proves to be an indulgence that satiates and satisfies.