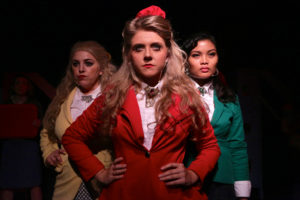 Remember those popular mean girls in high school? Well, they’re back, nastier than ever – and not only bullying, but belting!

OnStage Playhouse in Chula Vista has snagged the local premiere of “Heathers the Musical,” the 2010 stage adaptation of the 1988 cult film, ‘Heathers.’

The show deals with serious topics like teen suicide, eating disorders and gun violence, not to mention homophobia and ridiculing fat girls. But the quirky stage version is much funnier than the movie, which was considerably darker and crueler.

The musical sports the joint sensibility of its co-creators: Laurence O’Keefe, who worked on the musical adaptation of “Legally Blonde,” as well as the off-the-wall “Bat Boy,” and Kevin Murphy, a collaborator on the musical spoof of that 1936 classic, “Reefer Madness.”

Together, they whipped up a snarky, profanity-laced, often hilarious entertainment that’s getting a highly energetic showcase at OnStage.

Directors Manny and Tony Bejarano underscore the camp and the humor, and provide imaginative staging, including a couple of excellently-executed fight scenes. Shirley Johnston adds some lively, playful choreography. And the costumes are a hoot.

Many of the lines come directly from the film but they’re turned into funny, poignant or off-color songs. “Blue” might be my favorite, but its lyrics aren’t suitable for a family radio station.

The peppy rock score sometimes sizzles, but in a small theater, the three-piece band, especially the percussion, often overpowers or drowns out the singers, so many of the clever lyrics are missed. Some in the talented cast of 15 could articulate more precisely as well.

But they certainly have the look, especially Olivia Berger as the most malicious of the three Heathers; Kay Marion McNellen as Veronica, the good-hearted Heather-wannabe; Elizabeth Jimenez, touching as the overweight, ridiculed Martha Dunnstock, AKA Dumptruck; and M. Keala Milles, Jr. as the psychopathic Bad Boy, JD, who yanks an unsuspecting Veronica into his nefarious plans for student body annihilation.

It’s all way over the top, but it’s one wacky, wicked way to recall the horrors of high school. “Heathers,” as one song puts it, is “Big Fun.”