“ESCAPE TO MARGARITAVILLE” at the La Jolla Playhouse 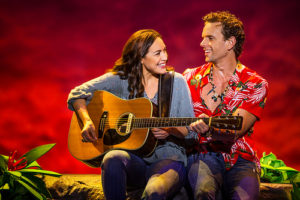 Like a catchy Jimmy Buffett tune, “Escape to Margaritaville” doesn’t go deep, but its laid-back vibe is infectious. You walk out smiling and singing – but the slightly spiked sugar-high soon wears off.

In the manner of most jukebox musicals, this is a forced effort to wrap some sort of story around a catalogue of songs. And the book, by TV veterans Greg Garcia and Mike O’Malley, offers a maddening, on-the-nose foreshadowing of just about every number.

So there’s a character who’s eternally “searching for his lost shaker of salt.” Of course, the protagonist, a Buffett stand-in, wears flip-flops. There’s a soon-to-erupt “Volcano” on the remote tropical island where the Margaritaville Hotel resides. Three men obsessively watch soccer. Another likes “Grapefruit [and] Juicy Fruit.” All these, if you’re not a Parrothead, are lyrics in the musical’s two dozen Buffett songs, including two new ones the singer wrote just for the show.

But the sum is a mishmash of themes, including a potato-driven energy plan and one woman’s body image issues. Incomprehensibly, there’s a tap-dancing chorus line of zombie insurance salesmen. Not to mention a one-eyed Viagra-popping old pilot who doesn’t really fit in either.

The central, reluctant couple makes sense, at least: she’s a Type A workaholic; he’s a guitar-playing beach bum. Their vacation fling doesn’t look like it’ll last. Then it does.

A lot of the story-song shoehorning is just silly. But the music remains irresistible. Smooth-voiced, effortless Paul Alexander Nolan is excellent in the lead role. His chemistry with charismatic Alison Luff is palpable. As their sidekicks, Charlie Pollock and Lisa Howard are funny and well-matched.

The design is colorful, and imaginatively varying. The sound, lighting, band, costumes and Flying by Foy energize the production. Christopher Ashley’s direction is energetic, but Kelly Devine’s choreography seems overanxious to please. The whole show kind of feels like that.

The talent ratio is high and the singing is exemplary. But, except for the legions of Buffett fans, I just can’t see this show making it on Broadway, where it’s reportedly headed. Then again, I said that about “Mamma Mia,” too