“THE ABSOLUTE BRIGHTNESS OF LEONARD PELKEY” at The Old Globe 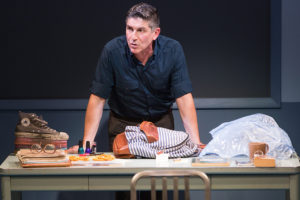 There’s a detective, and a murder. A few suspects, a brief period of whodunit speculation, but no hairpin turns or jack-in-the-box surprises. It all happened ten years ago, at any rate. The hapless victim was a flamboyant 14 year old male.

“The Absolute Brightness of Leonard Pelkey” isn’t much of a mystery, but it’s a terrific showcase – for the spectacular writing and performing skills of James Lecesne.

Co-founder of The Trevor Project (a national suicide prevention program for LGBT youth), Lecesne (pronounced luh-SEEN), is also author of the Young Adult novel, “Absolute Brightness,” the inspiration for this solo piece, which was rapturously received when it premiered Off Broadway in 2015.

Lecesne starts out as Chuck DeSantis, a hard-boiled, tough-talking Jersey gumshoe. “The dark side is my beat,” he admits. Then into his cubicle, where his daily repast is “a cruller and a cup of coffee,” struts what in his line of work is called “a dame,” the type with “legs up to here.”

That would be Ellen Hertle, proprietor of the local beauty salon. Soon, we meet her daughter, and maybe a dozen small-town, seaside Jersey Shore denizens, each with a story to tell about Leonard, an extraordinary boy who was, perhaps, a little “too much,” what with his eye shadow, mascara, nail polish and outrageous getups, including self-made multicolored hi-tops.

But in more important ways, he left an indelible mark on everyone he met (except, of course, the school bullies). We never hear from Leonard directly, but he’s a potent presence in the piece.

Despite a traumatic childhood, Leonard seemed to have a way of making every situation positive (one resident calls it “magical power”), of spreading joy and encouraging everyone to be themselves, which is the cornerstone of his existence. (That same resident will later regret telling him not to be “so much of [him]self”).

But his “magic” is not enough to save him.

What makes this show as special as Leonard himself is Lecesne’s impeccable, meticulous attention to the small but significant details – both in his acute, clever and funny writing, and his outstanding portrayal of these lovable eccentrics  — with virtually no props, no costume changes, no folderol – just plain old excellent, seemingly effortless acting. (If you’re interested in more on how he achieves what he does, look in the program, where he describes how he changes his posture, carriage or signature gestures for each of his creations).

Having grown up in New York, just a stone’s throw from New Jersey (the accents, dialect and phraseology are pitch-perfect here), I knew every one of these people – from the beauty parlor ladies to the smart, geeky teen-with-attitude (and raging insecurity), who turns out to be one of the bravest characters of all.  Okay, maybe I never knew a mob widow.

But, with Lucesne’s precise characterizations, we don’t have the slightest difficulty in distinguishing one from the other. It’s all in the posture shifts, vocal changes, speaking style, and the telling little quirk or habit that sharply defines each of these colorful folks. Young Phoebe, for example, is always nervously pulling up her socks. Director Tony Speciale helps keep the pace and timing impeccable.

A terrible tragedy was perpetrated on young Leonard. The mention of the world’s “evil” comes through as chillingly resonant, especially this week. And, as we all know, the societal problems described here have by no means gone away. The striking dichotomy between the nominal acceptance of difference in this country, and the continuing threat to the safety of the LGBTQ population remains stubbornly rooted in place.

And yet, there’s a hopeful tone to this piece. It’s easy to fall in love with every one of these delightful characters (except the “bad guy”).

The play is ideally suited to an intimate space like the Old Globe’s White Theatre, and to the arena stage that allows the audience to observe their fellow onlookers. Lecesne’s brilliantly controlled, beautifully nuanced performance is backed by equally fine-tuned lighting (Matt Richards) and scene-setting sound (Christian Frederickson).

Despite the darkness of having the title character’s life needlessly, violently robbed from him, there’s a sense of joy, and yes, brightness, in this piece, that sends you out, after 75 minutes, a little lighter, maybe a little more tolerant of those who are different in any way, and hopefully, a little more understanding.