“CAGNEY, THE MUSICAL” at the El Portal Theatre in North Hollywood 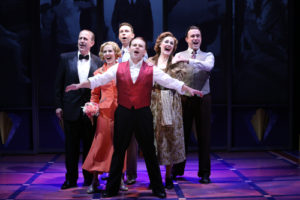 I was never a fan of gangster movies, but I once watched James Cagney in “Yankee Doodle Dandy” ten times in one week, when I was home sick from elementary school. I loved his Oscar-winning performance – the original tough-guy, singing and dancing to beat the band.

With some creative liberties taken, the 2016 show, “Cagney, The Musical” tells the story behind the truculent film persona. It’s bookended by the 1978 Screen Actors Guild event when Cagney was given a Lifetime Achievement award, and was introduced by his long-time frenemy, Jack Warner. Cagney and Warner were always on opposite sides of workers’ and union issues, and his activism got Cagney in trouble during the Red-baiting years.

The story really begins when a pugnacious young Cagney gets into a fight, and gets fired, over being shortchanged in a menial job. Decades later, he would walk out on Warner Brothers, when he was underpaid by Jack Warner, the despotic studio head.

Growing up in New York’s Lower East Side, Cagney was scrappy and confrontational, but he actually was better educated and trained than this show suggests. Still, he did get his start in vaudeville, where he met his wife of 64 years. That experience led to successful performances on Broadway, and ultimately, onscreen.

After a while, Cagney came to hate the tough-guy type-casting Warner imposed on him. He wanted to make movies with a heart, “about honor and justice.” That never panned out, but he lives on as a superstar.

Now, fresh from their successful Off Broadway run, the entire cast of “Cagney” has moved to the El Portal Theatre in North Hollywood, and they’re definitely worth the trip.

Electrifying Robert Creighton, who sings, taps like crazy, and also wrote some of the music and lyrics, completely and credibly inhabits Cagney. The other five cast members, under the dexterous direction of Bill Castellino and exhilarating choreography of Joshua Bergasse, commendably play multiple roles, even if they don’t remotely like Bob Hope or Bette Davis.