“KISS OF THE SPIDER WOMAN” at The Welk Resort Theatre 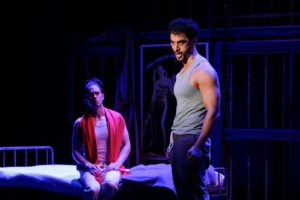 John Kander and (the late) Fred Ebb made musical magic and theatrical history by doing something risky and daring. They juxtaposed musical theater pizzazz with dark, serious themes.

It worked magnificently in “Chicago” (1966) and “Cabaret” (1975), and even “The Scottsboro Boys” (2010), which dealt, respectively, with women’s’ prisons; the Weimar era in Berlin, with the encroaching Nazi presence; and the racism and degradation of the Southern legal system.

In each of those, the tone and sensibility of the music very much matched the place and time; the cabaret numbers, razzle dazzle and minstrel show helped further the story, with cunning exaggerations that underscored the hypocrisy, lies and delusions of the story’s grim reality.

But in “Kiss of the Spider Woman” (2010), they did something different. The basic plotline, adapted from the 1976 Manuel Puig novel of the same name, is unequivocally as harsh as Kander and Ebb’s other, justifiably more famous musicals. The subject is the cruel repression and brutality of a Latin American prison. But here, the tonal shift is stark and jarring.

Many of the songs represent the fantasies of one of the two central prisoners: the film-loving, gay window-dresser, Molina. He loves to relive and retell the details of all the movies of his favorite actress – a campy diva named Aurora. This allows for big, brash production numbers, with chorus boys (who double as prisoners) and the spangled and feathered vamp of his dreams. But then, we have to return to the reality of the piece, which includes beatings, poisoning and murder, behind bars.  It’s whiplash-inducing and unnerving. The musical numbers undermine rather than enhance the gut-wrenching story.

Yes, it won multiple Tony Awards (Best Book, Best Score, Best Musical). But look how often it’s been produced in the past 25 years, as opposed to Kander and Ebb’s other classics.

Thirteen years ago, the tiny 6th@ Penn Theatre (now home to ion theatre) produced the two-person straight-play version of the story, written (originally in Spanish) by Puig himself, an Argentine novelist, playwright and screenwriter who spent most of his life in exile. The English language version (translated by Allan Baker) premiered in London in 1985.

The local production was searing and unforgettable, an intense prison drama set in a cramped, claustrophobic space. Molina and his cellmate Valentin, the macho revolutionary, were practically in your lap.

There is no Spider Woman in the play. Her sultry glamour was conveyed solely via the garrulous Molina’s narrative skills. The look of the films and the actress were left to the imagination. I found that more potent and dramatically satisfying.

In the musical, everything is spelled out and shown (Puig died in 1990, three years before the musical adaptation opened on Broadway). Acclaimed playwright Terrence McNally wrote the book to Kander and Ebb’s score.

At the Welk Resort Theatre, expert director/choreographer Ray Limón is giving the piece the full-on, glitz-and-glam treatment. The male chorus is striking and talented. And mercifully, there are live musicians in the pit, under the assured musical direction of Justin Gray – back where he belongs. The live music contributes mightily to the prodigious energy of the production.

Natalie Nucci looks splendid in those spangly, feathered outfits. She sings and dances quite well. What’s missing is the sexuality, irresistibility and temptress charisma the role demands.

But as the pivotal characters, Jeffrey Scott Parsons and Richard Bermudez are first-rate, both dramatically and musically.

Parsons even gets to dance a bit (he’s an ace hoofer), tangoing with his fantasy siren. He brings an aching vulnerability to Molina, who flaunts his Theater Queen cred to hide his pain and shame; he’s been demeaned and humiliated both inside and outside the prison.

Bermudez is the tough-skinned, robust Marxist who gradually reveals his impoverished upbringing and deep disenchantment with the Church and the revolution, in his magnificent rendition of one of the show’s most powerful numbers, “The Day After That.” Bermudez brings impressive shades and layers to the character. We watch as he softens toward Molina and transforms the nature of their relationship.

The two secondary female roles — Molina’s adored mother (Lisa Dyson) and Valentin’s elegant girlfriend (Kylie Molnar) — sing beautifully together in “Dear One,” the moving ballad of barely-disguised yearning, which turns into a heart-rending, contrapuntal quartet when Molina and Valentin join in.

The choreography is a heady mix of Latin and Broadway, excellently executed. The wizard of flamboyant costuming, Janet Pitcher, has once again worked wonders (though some of the costumes were rented from The Theatre Company in Upland, CA). The prison-bar-and-spider web set (Ray Limon, Jennifer Edward, Doug Davis) and the expert lighting (Jennifer Edwards) and sound (Patrick Hoyny) add dimensionality to the action.

In the end, it’s the self-proclaimed “coward,” Molina, who becomes the unwitting hero of the story.

This is a big, flashy production of a show you’re unlikely to see often. Catch it at the Welk; it was both risky and commendable for the theater (and its estimable producer, Joshua Carr) to undertake it.