“BENNY AND JOON” at The Old Globe 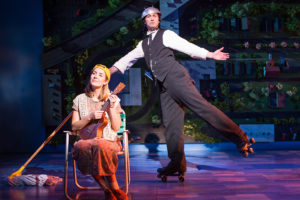 Benny and Joon live a fairly regimented, routinized life. That’s what he thinks is best for his sister, who has schizophrenia.

She gets auditory hallucinations, she runs into the street to direct traffic (wearing a snorkel mask, carrying a pingpong paddle), she has a penchant for breaking things and setting fires, and she responds poorly to noise or stress. (She’s also a visceral abstract painter).

Ever since their parents died in a car accident, Benny has kept a tight rein on Joon. He’s extremely overprotective and won’t let her stay alone (they’ve just lost the third caregiver in a year). He worries and frets about her constantly, subsuming his own life to hers. He struggles under the weight of the enormous responsibility. But things are about to change.

I didn’t think it would be possible to replicate the quirky sensibility of the movie in a musical. But The Old Globe has done it.

This world premiere, with music by Nolan Gasser, lyrics by Mindi Dickstein and book by Kirsten Guenther, is totally delightful. It completely captures the whimsy and the serious-mindedness of the film.

Bryce Pinkham (previously seen and Tony-nominated on Broadway in “A Gentleman’s Guide to Love and Murder,” though not at its inception at The Old Globe) gives a star-making performance as the idiosyncratic Sam. He’s mesmerizing, and exceedingly comical, with his Charlie Chaplin pants and cane, his Buster Keaton sad-sack deadpan and porkpie hat. As an inveterate film fan (both offstage and on), he has a mind-boggling ability to imitate and replicate the voices and delivery of famous stars in equally famous movies (“ET,” “Animal Crackers,” “Lust for Life,” “The Godfather,” “It’s a Wonderful Life,” and countless others). His physical comedy is also superb.

Being more than a little off-kilter himself, Sam completely ‘gets’ Joon. She’s thrilled that he’s the first person to treat her like an adult.

While Sam becomes her latest – and most singular — caregiver, cleaning (on roller skates) and cooking (cheese sandwiches ‘grilled’ with an iron; popcorn popped in the washing machine), Joon becomes calmer and happier than ever. She and Sam are falling in love.

This does not sit well with Benny, who feels that Joon doesn’t know the first thing about love, autonomy or independent thinking (though she’s obviously quite smart and literate).

Meanwhile, the guys at Benny’s car repair shop are urging him to pursue Ruthie, who works in the local diner, and definitely seems interested.

How all this romance pans out is the arc of the musical. But it’s mostly about a tightly connected brother and sister, their grief, loss, denial and co-dependence – and their increasingly fraught relationship.

Both Joon (full name, Juniper) and Sam have unconventional ways of communicating. Much of the dialogue in the musical comes directly from the film (perhaps too much). Dickstein’s lyrics do a marvelous job of supporting and defining these characters, their personalities and their inner thoughts (which, in Joon’s case, can be highly poetic – if sometimes disjointed – with particularly strong visual and color imagery).

Hannah Elless (who appeared at the Globe and on Broadway in the Steve Martin musical, “Bright Star”) is wonderful as Joon. Though some professionals or patients in the field of mental health may not feel that schizophrenia is sensitively or realistically enough portrayed, neither is it romanticized or trivialized. At one point, Joon has a full-on panicked meltdown, which is heart-breaking to watch, and lands her in a psychiatric hospital.

Joon’s doctor (Natalie Toro, who also plays Joon’s last caregiver) is a bit hard to believe at times: how she talks, what she condones. And hard-boiled, sarcastic but loving Ruthie (dynamic, robust-voiced January LaVoy) is perhaps a little too good and tolerant to be true, but she’s a lovable character nonetheless.

This is, after all, a love story, with a hopeful, happy ending – not 100% realistic, perhaps, but 100% enjoyable, poignant and affecting.

The music is catchy and mostly lyrical, though several of these skillful singers are pushed above their vocal ranges at times. In addition to the clever lyrics, some of the song titles alone are entertaining: “Sam’s Bread Dance,” “Grilled Cheese Ballet” and the hilarious defense of raisins, “It’s a Shame.”

Andrew Samonsky is thoroughly credible as Benny, always struggling to do the right thing, while inadvertently suffocating his beloved sister. And he harbors bottled-up anger and resentment, which explode in the second act.

There’s so much to like here, including the ingenious way director Jack Cummings III, designer Dane Laffrey and choreographer Scott Rink keep things both elemental and magical. There’s less dancing than furniture-moving, and that does become repetitive, and could be minimized.

The proscenium-within-a-proscenium design is backed by an aerial view of Spokane, Washington in the early 1990s, where the action is set. The lighting design (R. Lee Kennedy) uses pin lights and spotlighting to excellent effect. The sound (Kai Harada) is sometimes less crisp than desirable; some lines and lyrics were difficult to discern on opening night.

This uplifting world premiere, six years in the making, feels nearly Broadway-ready, with some tweaks and tightening. Its themes of acceptance and compassion, and its “anything is possible” attitude, seem especially apt at this moment in time