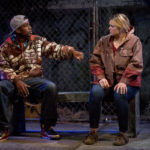 In Martyna Majok’s drama, “Ironbound” is both a location and a condition.

It’s a multi-ethnic, working-class New Jersey neighborhood, and “Ironbound” also describes the predicament of the central character, Darja, who is shackled by poverty and circumstance. One half-step from homeless, she holes up at a seedy bus stop, boxed in by a chain-link fence.

The play hopscotches in time, between a hopeful, pregnant Darja and her young, musician-husband, both recently arrived from Poland, in 1992, and the desperate, defensive  survivor Darja of 2014, who has suffered through two husbands and a philandering boyfriend, and whose addict son has taken her car and disappeared.

As if all that isn’t enough, the factory where she worked has shut down, she just lost her house-cleaning job, and the boss who became her second husband was physically abusive.

She takes refuge at the bus stop, but it’s by no means a safe space, as a black street hustler points out. He feels sorry for her – 42 years old and still waiting for a bus – a kind of vehicular Godot that will never come.

The hustling high schooler offers her money, but her fierce pride makes her unwilling to take anything from anyone.

Truth be told, Darja is somewhat complicit in her situation. Bad choices, coupled with a hard edge and hot head, have hindered her prospects for improvement.

But Majok’s spare, gritty writing makes us care about Darja and admire her unflagging resilience.

At Moxie Theatre, the three males are wonderfully portrayed. But the fulcrum is Jacque Wilke, who gives a stunning performance, deeply accented, multi-faceted and delicately nuanced.

Moxie’s new artistic chief, Jennifer Eve Thorn, backed by an excellent design team, directs with compassion and muscularity. There isn’t a lot of action, but the piece paints a heart-rending portrait.

Despite the bleak scenario, there are rays of light and humor in this intense, 90-minute, unblinking look at the ordeal of immigrants.

We can’t afford to turn away – for the good of our consciences, and our unequal, often unwelcoming country.