“THE PIRATES OF PENZANCE” at San Diego Opera 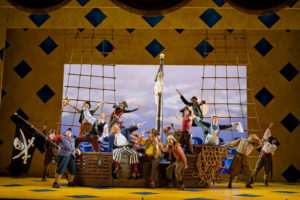 Sentimental swashbucklers. Bumbling Bobbies. A bombastic but lily-livered Major General. And a slavish devotion to Duty and Queen.

Welcome to the satirical, society-skewering world of librettist W.S. Gilbert and composer Arthur Sullivan, those masters of absurd Victorian comic opera, and their wacky “Pirates of Penzance,” wildly popular since its 1879 debut.

It’s veddy, veddy British in its sensibilities, and very very silly in its storyline. But also, at San Diego Opera, very amusing and entertaining.

With comical sets and costumes (rented), the elaborate production, as whimsically staged by Seán Curran, is a delight. Curran employs every shtick in the book, from pratfalls to stylized moves and crazy gaits. (The chorus is impressively game and agile).

The plot, with all its goofy, implausible twists, is nothing short of ludicrous.

Frederic (handsome tenor Mackenzie Whitney) is apprenticed to a pirate by mistake, because his devoted but hard-of-hearing childhood nursemaid, Ruth (comical mezzo Luretta Bybee), mis-heard his father’s desire to have Frederic train to be a pilot; she thought he said ‘pirate.’

His indenture is scheduled to last until he turns 21, at which time Ruth is devastated to learn that he plans to leave her behind and refuses to marry her (despite the fact that she’s 20 years older than he – and he’s never laid eyes on another woman, since his apprenticeship started at age 8).

Later, after Frederic falls for the beautiful young Mabel (golden-voiced soprano Maureen McKay), one of many daughters of the ridiculously pompous, bombastic Major General (spry, funny Patrick Carfizzi), Ruth reveals that Frederic was born in a Leap Year, so he’s really only five years old, and will have to return to servitude for another 40 years or so, until he’s technically 21.

Of course, everything gets straightened out in the end. It has to: Queen Victoria herself appears. Frederic and Mabel can wed, and the pirates (actually misguided Peers, it turns out) can marry the rest of the Maj. General’s offspring.

It may take place in another time, country and social milieu, but the jeers and jibes at the strata and statutes of society are not only comprehensible, but eternally timely. And the physical comedy never fails to amuse.

As the brash but somewhat klutzy Pirate King, Greer Grimsley is dramatically funny and vocally robust. Carfizzi brings down the house with the impeccable “Pirates” patter-song, “Modern Major General,” but he also gets to display his rich bass-baritone in his second act pastoral aria, “Sighing softly to the river.” As his most assertive and amorous daughter, McKay displays a stunning coloratura, with luscious vocal  leaps, and trills that thrill.

Bass-bari Ted Pickell is engaging as first-mate Samuel, and Bybee (Grimsley’s real-life wife of 30 years) plays Ruth to the humorous hilt. Baritone Michael Sokol is comically cowardly as the Chief of Police, who reminds us, topically, that “a policeman’s lot is not a happy one.”

The red-velvet curtained stage is gilt-framed with a vaudeville-style proscenium arch that, along with the stage business, keeps us from taking anything too seriously. The tone is just right throughout. It’s impossible not to fall for these fun and funny “Pirates of Penzance.”

Clearly, the SDO gamble to expand its offerings beyond grand opera is paying off. There were many young people in the audience at the performance I attended, and they were laughing their little heads off – and screaming their approval at the curtain calls. Purists may scoff, but a diverse lineup is proving to be essential to the survival of opera companies nationwide. Next up, as part of the detour series, a provocative, small-scale, two-person opera, “As One” (11/10-11/12). Another opportunity to take a musical chance.

Even if you’ve always thought that opera isn’t your thing, “Pirates” is a guaranteed good time – an operetta stepping-stone, one hopes, to The Real Thing.

But hurry up, before this ship sails; there are only two more performances left. Eye-patches welcome.