“HOMOS, OR EVERYONE IN AMERICA” at Diversionary Theatre 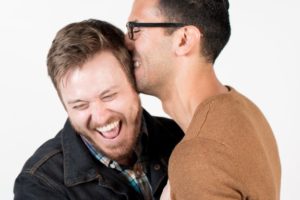 Of course, you’ve heard of a New York Minute. Well, you might call the West coast premiere at Diversionary Theatre 100 New York Minutes. It plays at a rapid-fire, rat-a-tat rate

“Homos, or Everyone in America,” by Jordan Seavey is, structurally and linguistically, as provocative as its title.

The piece leapfrogs in time, from 2006 to 2011, chronicling the relationship between two urban, gay Brooklynites. The story is sliced into jagged, non-chronological segments that we have to piece together. You don’t have to work hard, but you do have to listen fast.

The intelligent, literate work is presented in a style of language play and banter that certain educated New Yorkers eat for breakfast. Literary and political references fly by, expressed in clever and unexpected ways.

But there’s more than just playfulness here. Serious subjects are broached, including the divides within the gay community–  about becoming different from or identical to the heteronormative world, especially in terms of marriage; and the specific complexities and persistent threats of contemporary gay life.

The play premiered Off Broadway just last year, so this is another coup for Diversionary Theatre artistic director Matt M. Morrow.

Seavey’s colorful characters, though nameless, are very specific. The Writer is adventurous, experimental. The Academic is more conventional, dependent and monogamous. Their sexuality is as potent as their arguments and their breakup.

What makes the play relevant to “Everyone in America,” as the subtitle suggests, is that this gay couple reflects universals in all relationships: coping with jealousy and infidelity, commitment and compromise, neediness and independence, confrontation and avoidance.

Morrow’s precise, crackerjack direction underlines the superlative, intertwined performances of Jacob Caltrider and Alex Guzman. The pace at which they have to think, speak, move and shift moods is exhilarating. In small secondary roles, Michael C. Louis and Andréa Agosto are appealing and compelling.

The honesty is brutal and bruising. The raw sex-talk is unfiltered. You come away feeling as if you’ve lived through an intense relationship tainted by trauma.

Color this vibrant piece of theater dramatic and extraordinary.