“A PIECE OF MY HEART” at OnStage Playhouse 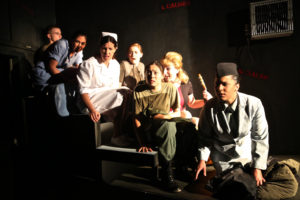 Here’s a shocking and appalling fact: The U.S. Government has no official list of how many women served in the Vietnam War.

Shirley Lauro’s award-winning 1991 play, “A Piece of My Heart,” gives voice to some of those unheralded, uncounted women. We meet six characters: four nurses, an intelligence specialist and a country singer in an all-girl band sent to entertain the troops.

Each was used and abused, ignored or mistreated. They worked crazy hours. And yet, when they were back in the world, they missed something.

As one nurse puts it, she left a piece of her heart with every patient she encountered.

They all left a little something behind in Vietnam – the camaraderie they couldn’t replicate at home, the feeling that their lives were meaningful and they were doing something important.

They returned with psychological and/or medical problems, and half the country literally and figuratively spit on them.

The searing drama, based on conversations and diaries, takes us through all the stages of these women’s experiences, starting from the lead-up to their deployment (voluntary or reluctant), and proceeding to their unrealistic expectations of their job and the much harsher realities when they arrive, their complete commitment to and immersion in their work, the stress, the liquor and drugs, the sex and love, the inevitable burnout, the joyful departure, the disappointing return and the ultimate re-integration into life at home.

None of them would ever be the same. In trying to help us understand how and why, the characters take us along on their gut-wrenching ride.

Since most of the script is in monologue form, the play runs the risk of being static. But at OnStage Playhouse, James P. Darvas devises many ingenious ways to liven it up, build interaction, and make us feel like we’re actually there in the heat and thick of it. His staging is imaginative, and he makes excellent use of sound and lighting (M. Keala Milles, Jr.) to enhance the throbbing emotion of the reports and recollections.

The evening begins, as OnStage productions so often do, in the lobby, where photos of real vets are hung, and a wall of comments features reactions from prior audience members. Once seated, before any actors appear, we see quick clips of U.S. Presidents, from FDR to Obama, soberly announcing the need for additional troops for whatever battle was at hand. Vietnam clearly wasn’t a one-time American war experience, but it’s one we, as a country, have yet to come to grips with and deal with satisfactorily.

Witness the current Ken Burns PBS series, and the dedication of this year’s Miramar Air Show to Vietnam veterans. We may revisit the era, but rarely is the story told from the perspective of women.

The production and the script do everything possible to engender a sense of the hell these women went through, and the rough treatment they got from their male colleagues, the military brass (who scoffed and laughed at reports of rape), their friends and families, and the ineffectual V.A. at home.

The set (Hector Cisneros) is primarily a series of rough-hewn wood platforms that the women stand on, run up and down, and scramble up to, effectively serving as offices, hospitals and other locales at home and overseas.

The cast is superb, with a palpable dedication to the tales they’re telling and the real women they’re representing. The characters come from different parts of the country, but their narratives have unequivocal commonalities.

Each of these women (Allison MacDonald, Carla Navarro, Emilee Zuniga, Emily Candia, Ray-Anna Ranae and actor/singer Sarah LeClair) and one man (Devin Wade) who stands in for all the males in these stories, rides a roller coaster of emotions, from intense to uncontrolled to wholly professional and unflappable. We get a rarely-heard taste of black and Asian viewpoints, and how race, not only gender, also factored into how they were treated.

When they all show up for the dedication of the Vietnam War Memorial in Washington, D.C., they are reunited with kindred spirits. Only these people know exactly what they’ve been through, at war and at home. Each feels compelled to leave something behind – a nurse’s cap, a photo of a dying man, an incendiary report that no one read or acknowledged, but which could have saved countless lives. This is just one of the throat-tightening, tear-jerking moments in this production.

We’re left with a final, agonizing image: a single saluting soldier, silhouetted against a projection of the 58,000 names on the wall. A potent ending to a darkly honest, powerful piece of theater.