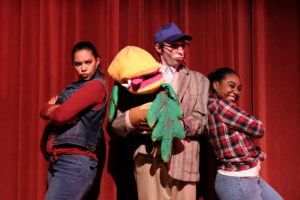 It’s all about a man-eating plant hellbent on world domination.

“Little Shop of Horrors” still feels like a wacky, sci-fi comedy  — or, as the subtitle has it: “A horticultural horror story.”

What’s significantly less funny is the physical abuse the sadistic dentist inflicts on his submissive girlfriend. The black eye, the arm-sling, and worst of all, the whack across the face – are not as amusing in 2017 as they might have been in 1960 (as if that was ever an acceptable source of comedy). Still, it must be said that the tooth-man’s song, “Be A Dentist,” explaining how his lifelong love of perpetrating pain led directly to his career choice, is still pretty farcical – unless you happen to be a member of PETA (he was brutal on the family pets).

The rest of “Little Shop” still holds up quite well in the half century since its debut.

The show is getting a highly entertaining staging at the Coronado Playhouse, under the whimsical direction and choreography of Shirley Johnston.

As with many community theater productions, the cast varies in talent and experience, but all the principals are committed and compelling.

The three Doo Wop Girls, with the best girl-band names ever: Chiffon, Crystal and Ronette (Brooke Henderson, Myranda Young and Stephanie Nesbitt, respectively) are a diverting Greek Chorus (better together than separately), mastering, for the most part, those tight harmonies and ‘50s moves.

Steven Jensen handles the shtick and Yiddishisms of the harried Skid Row flower shop owner, Mr. Mushnik, who took in the orphaned Seymour, but treats him like dirt (yet more abuse, this time verbal; seems to be a through-line in the musical).

As the hapless zhlub, Seymour Krelborn, the horticultural anti-hero who cultivates the nefarious plant, Connor Boyd has just the right lovable mix of nerdiness, klutziness and heart. And he displays demonstrable ambivalence and angst over what he has to do to feed the plant so he can win acclaim – and the heart of the Girl of His Dreams – Audrey (it’s for her that he named the ginormous flytrap Audrey II).

Audrey (Dani Leandra) is the gullible gal who doesn’t think she deserves anything or anyone good (“I have a past!”), and goes with any guy who’ll take advantage of her. And they certainly do. But she has dreams, of “Somewhere That’s Green” (i.e., the cookie-cutter tract-house community of Levittown, New York, the country’s first post-war, mass-produced suburb). Leandra’s powerful voice embodies Audrey’s anguished, self-deprecating life.

Edgar Diaz-Gutierrez is playfully ludicrous, in a despicable way, as Orin Scrivello, DDS, the pain-inducing professional who’s addicted to nitrous oxide (laughing gas), which he hogs for himself, refusing to use it to diminish the discomfort of his patients. The actor’s laugh is demonically funny, and his song and demeanor capture the contemptible character.

William B.J. Robinson is completely credible as the homeless wino at the top of the show, and pitch-perfect as the deep-toned speaking and singing voice of Audrey II.

The four-piece band (under the baton of music director Kirk Valles) sounded just fine, but the miking was problematic the night I was there; when singers would belt, their volume was ear-shattering at times.

The set (Stan Soth), costumes (Shelly Crickett), lighting (Matt Novotny) and wigs and makeup (Pam Stompoly-Ericson) all contribute to establishing a strong sense of place, if not time. The script seems rooted in the ‘50s, though the program description says “the early year of a decade not too far from our own.”

There’s one timely caution this show inspires:  Here’s hoping you didn’t buy any odd-looking plants during the recent solar eclipse.