“OF MICE AND MEN” at North Coast Repertory Theatre 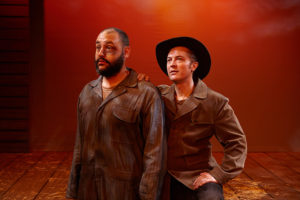 1937. The peak of The Great Depression. Dreams were hard to come by, especially for migrant farm workers in California.

But George and Lennie have a whopper: they’re going to get their own piece of property (and “live off the fatta the land,” as Lennie puts it). George has the whole plan laid out. Lennie’s all in, mostly because he’ll get to tend the rabbits; he loves to pet soft things, which becomes his undoing.

Lennie is a bulky, naïve, simple-minded mountain of a man. While the other characters in John Steinbeck’s novella (published in 1937) were admittedly composites, Steinbeck, who spent some time in the fields during his teen years, admitted that “Lennie was a real person… I worked alongside him for many weeks… He’s in an insane asylum in California right now… He didn’t kill a girl. He killed a ranch foreman,” while defending his friend.

Steinbeck adapted his story for the stage while the novel was still on the best seller lists. The drama predated the Tony Awards, but it won the New York Drama Critics’ Circle Award for Best Play in 1938.

It still packs a punch.

Every character has dreams, and several are anxious to hitch their wagons to George and Lennie’s, including Candy (John Greenleaf, in a performance of considerable pathos), an aging handyman who lost his hand in an accident, but keeps his loyal old dog – for a time; and Crooks (Laurence Brown, heart-rending), the “stable-buck,” who’s isolated from the other men because he’s black, though he’s more educated than they. And then there’s Curley’s Wife (Sierra Jolene, sassy and aptly seductive), who isn’t even graced with a name in the piece. She wanted to be a movie star; instead, she married Curley (Wallace Bruce, perfectly mean, cocky and confrontational), the boss’s diminutive, pugnacious son, who wears a leather glove filled with Vaseline to keep his hand soft for his new wife, but pays her no attention, instead picking fights, especially with bigger guys. She just wants someone to talk to, so she hangs with the ranch-hands, flirtatious and provocative, and thereby inviting tragedy.

The through-line here is loneliness. Each of these characters is an isolate, willing or unwilling. The men have short-term work gigs, make few friends; they just move on to the next job, drifting, itinerant, nomadic, never putting down roots or establishing lasting relationships.

They’re all amazed that quick-witted George (Jacob Sidney) and dim-witted Lennie (Nicholas Mongiardo-Cooper) travel together. But George is Lennie’s protector and guardian. And though he often berates his buddy, and says he’d be better off without him, it’s Lennie who helps sustain George’s dream of a better life.

Sadly, despite their “best-laid plans” (a quote from the Robert Burns poem, “To a Mouse,”  which inspired Steinbeck’s title), none of these downtrodden folks will have their dreams realized, primarily due to their powerlessness — a function of economic, intellectual, physical or societal (racial, gender) constraints.

At North Coast Repertory Theatre, Richard Baird audaciously grabs this dark, sometimes melodramatic classic by the horns. He has assembled a stellar cast, and under his meticulous direction, rife with moments of cunning stage business, each actor creates a memorably multi-dimensional character. Beyond even the hardest edge, there’s a sliver of vulnerability.

Sidney and Mongiardo-Cooper are wonderful foils: the wiry little guy and the lumbering big one. Lennie isn’t played as severely disabled as in some productions, just gullible, literal-minded, well-meaning – and thoroughly unaware of his own strength. This George is nimble, physically and verbally, even waxing poetic at times.

You could look at each of these performers —  the excellent ones already mentioned, plus J. Stephen Brantley (wonderfully steadfast and sensitive as the muleskinner, Slim), Max Mackey (cheerfully insensitive as Carlson), Justin Lang (weather-beaten and laconic as Whit) and Ted Barton (striding and self-possessed as The Boss) – and get a palpable sense of the hard-hitting times and the hardscrabble lives.

The sturdy performances are set in relief by the inventively unfolding weathered-wood set  (Marty Burnett), the dusty, ragged costumes (Elisa Benzoni) and the howling, evocative sound (Aaron Rumley, with interstitial music written and performed by several cast members), which together make us feel as if we’re right there in that sweaty, claustrophobic bunkhouse.

There’s a good deal of repetition in the text (far beyond Lennie’s indelibly reiterated request: “Tell about the rabbits”). There’s also an unnecessary foreshadowing (when old Candy tells George, “I shouldn’t ought to have let a stranger shoot my dog”). There’s less subtlety than one might prefer in a more modern drama or tragedy. But the play remains painfully relevant: the plight of migrant workers in this state hasn’t changed drastically in the near-century since the book and play premiered.

Turns out, Steinbeck wasn’t just a social chronicler and moralizer; he was, sadly, prescient.