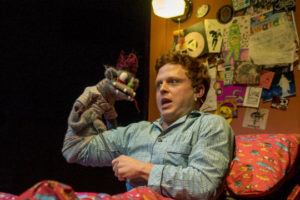 If you put a sock puppet on your hand, you’d expect it to do what you did and say what you wanted it to say. But not Tyrone. He has a mind of his own – and a filthy mouth to go with it. The mop-haired moppet definitely has bite – and teeth that draw blood.

Shortly into Robert Askins’ crazy, macabre hair-raising comedy, “Hand to God,” Tyrone declares that he’s The Devil. Or maybe he’s just the id or alter-ego of the owner of the body that created him: the painfully shy, deeply sad, confused and broken young teenager, Jason, who’s trying to deal with his father’s recent death (the man ate himself into oblivion and had a heart attack), and his mother’s crippling despair, self-involvement and neglect.

So, if you’re squeamish about language, violent sex, bloody brawls or satires of religion, maybe you’d be better off at home.

But if you crave something wildly risky and you can laugh at outrageous acts, words and behaviors, this may just be your theater outing of the year.

Young scribes are always told to write what they know: Askins has done that in spades.

Like his human protagonist, Jason, Askins grew up in Cypress, a small, semi-rural Texas town. He was born into a fervent Protestant family, and his mother had a Christian puppet ministry at their church, teaching about good and evil through Bible stories. And like Jason, his father died when he was in his teens.

Which brings us to the 1997 setting of the play. In the church basement, Margery (a deeply distressed, confused and engagingly off-the-wall DeAnna Driscoll) is trying to make a go of this puppetry workshop, with three apathetic, hormonal teens.

Jessica is somewhat standoffish and snooty (she tells the group she’s “more into Balinese shadow puppets” than goofy sock puppets). She’s well aware that Jason is attracted to her but he’s too introverted and inhibited to act on it. And though she seems diffident at first, when she puts on her puppet, Jolene, she takes matters into her own hands, so to speak. Suddenly, she becomes something of a French chanteuse and seductress, and cheerfully engages in the wild sex acts previously mentioned – and then some.

Her sex partner is the monstrous Tyrone, but it was one way to play out unspoken, suppressed desire.

Every character here does something unexpected and out of character. Each has repressed anger or lust, including the supposedly straitlaced but inept Pastor (wonderful Jason Heil), who makes inappropriate and insensitive moves on Margery, a new widow he’s been counseling and consoling for the past six months, since her husband’s death). Margery rebuffs the ineffectual Pastor, but she’s not immune to the come-ons of tough/ruthless Timothy.

Beneath its raunch and cheerful subversiveness, the play is really about being honest, and taking responsibility for your own acts (no copping out with “The Great Excuse”: “The Devil made me do it”). It’s about grief and pain and how they can warp an individual and a family. And it’s about the hypocrisy of religion and how faith alone can’t solve all problems or get you through all difficult situations.

Tyrone stands in a class by himself, acting on his basest instincts, verbalizing what no one would dare say. At times, we all have those dark impulses, lusts and even violent fantasies, but becoming an adult is learning how to suppress and sublimate.

One of the most brilliant parts of this wildly imaginative, adventurous, unpredictable play is the duality of the Jason/Tyrone character, and mega-talent the double role requires.

Caleb Foote gives a virtuosic performance, changing his voice and manner (he’s so withdrawn and tic-riddled as Jason, so harsh and antagonistic as Tyrone), while deftly manipulating a puppet with both hands, and discoursing with himself in rapid-fire, angry, funny ways. Jason even battles with Tyrone, who actually seems to push him around. It’s a neck-snapping, challenge, and it’s thrilling to watch.

Beneath all the violent acts, and brutal honesty, Askins manages to show compassion for his flawed characters. His writing is sharp and hilarious, though he does tend to go to extremes and veer way over the top. But beyond the blood, there’s tenderness.

Robin Roberts’ rotating set is a marvel, changing from the detailed basement, with it faux-jolly, preschool feel, to the Pastor’s office, to the playground, to a harrowing car ride with dysfunctional mother and son, and back to a “bedeviled” basement which has been Satanized with blood-red smears and hellish, demonic graffiti.

Lynn Jennings, of the San Diego Guild of Puppetry, was Puppetry Consultant, and the little critters are manipulated flawlessly.

A superb ensemble brings this gleefully incendiary play to devilish life. The creepiest part is, given the fact that we’re all conflicted, often bifurcated, and frequently repressed, there’s probably a Tyrone lurking in each of us.