“THE LEGEND OF GEORGIA MCBRIDE” at Cygnet Theatre 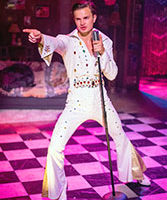 Soon after the beginning of “The Legend of Georgia McBride,” Elvis has left the building. That is to say, Casey, an Elvis impersonator at a Florida Panhandle dive-bar, has just lost his gig, replaced by a couple of drag queens.

When one of them drinks herself into a stupor, Casey agrees to wiggle into pantyhose, grab a wig, and strap on platform pumps. The show, after all, must go on.

The only problem is, Casey has a wife who’s just announced that she’s pregnant. So, although Casey is finally earning enough to pay the rent, he can’t bring himself to tell her how he’s doing it.

Meanwhile, he gets high-spirited drag coaching by the veteran, Miss Tracy Mills. And he’s disparaged by her unreliable sidekick, Anorexia Nervosa, AKA Rexy, who delivers a killer monologue about the real meaning and import of drag.

“Drag ain’t a hobby, baby,” Rexy snarls. “Drag is about respect, heritage, lineage. Drag is a protest… a raised fist inside a sequined glove.”

In this somewhat unlikely but funny scenario, created by the redoubtable playwright Matthew Lopez, Casey comes into his own, solidifies his identity and evolves into a responsible adult, a satisfied, if unconventional, performer — and an honest husband.

So, “The Legend of Georgia McBride” is a gussied-up coming-of-age tale, and also a love story, between the young adorables, Casey and Jo.

At Cygnet Theatre, Sean Murray directs a knockout cast, who lip-synch their guts out. As Casey, Spencer Bang is a veritable, irresistible find. David McBean is, as always, so very fabulous. No one deadpans a bitchy one-liner better. Chesley Polk and Lance Carter contribute mightily to the good will and guffaws. Alexandra Slade has the most thankless role as Casey’s wife, Jo, but she brings heart to it.

The flamboyant, outrageous costume designs of Jennifer Brawn Gittings should get a standing O all their own. Sean Fanning’s set is pretty terrific, too.

In this sassy, intermissionless show, you’re bound to get a few laughs, and maybe even learn a few things. It’s anything but a drag.