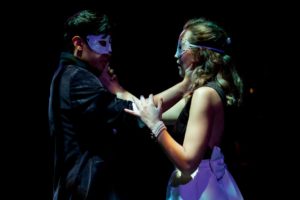 Juliet was barely 14 when she met her star-crossed soulmate, Romeo. They were kids – capricious, impulsive, hormonal.

So, it seems appropriate that, in the USD/Old Globe Shiley Graduate Theatre Program production of Shakespeare’s doomed romance, directed by Delicia Turner Sonnenberg, the energy is youthful, energetic, athletic and hot-blooded.

The first half has plenty of salacious humor and smutty double entendres (Shakespeare had a penchant for bawdy innuendo). But, events and emotions turn serious in the second part.

These grad students are a talented lot, and many of them play multiple roles (some more effectively than others).

The sword-fighting is intense, and so realistic that it appears downright dangerous at times. And the women are no wallflowers here. Morgan Taylor plays Juliet’s volatile cousin, Tybalt, and she faces both Mercutio (brash, funny Eric Weiman) and Romeo (Jose Martinez) with two long knives to their single swords. (Spoiler: Tybalt kills one and is killed by the other). Dazzling work from movement coach Brian Byrnes.

Renardo Charles Pringle, Jr. is sympathetic as the hapless, well-meaning Friar Lawrence, who inadvertently sets the tragic events in motion.

The Capulet parents (Daniel Ian Joeck and Yadira Correa) are quite aggressive (she’s icy; he yells too much). Montague (Jared Van Heel) is more subdued.

But the whole play has to pivot on the titular twosome.

In this production, there’s a feverishness about them, from the first encounter. They can’t keep their hands – or lips – off each other. It’s a believably amorous adolescent attraction. Talk about your impetuosity: they meet one day and secretly marry the next.

As Juliet, Larica Schnell has a beautifully childlike innocence, but heart-piercing love makes her more resolute, fiercely faithful and courageous to the end.

Martinez’ Romeo is a physical and emotional guy, grieving his rejection by Rosaline at the outset, until he’s completely smitten by Juliet at first sight, and then everything changes.

The costumes (Elisa Benzoni) are hip and contemporary, though the set (Brian Redfern) harks back to the past, with marble floors and movable travertine balustrades. The lighting (Sherrice Mojgani) and sound (Melanie Chen Cole) provide strong support. The unmiked voices are excellently projected, a testimony to the students’ training (and vocal coach Jan Gist). And the language is deftly handled.

Turner Sonnenberg makes outstanding use of the arena space of the White Theatre. With subtlety and finesse, she keeps the action dynamic; the crafty, fluid movement enhances the audience experience, from any vantage point.

At the performance I attended, a cohort of young people was ushered out at intermission. Apparently, the accompanying parent or guardian thought the production was too crude for their youthful sensitivity (though they undoubtedly see and hear far worse in school, online and on TV). But all that boorish exuberance is only prologue, Shakespeare (and Sonnenberg) just having a bit of racy fun.

To miss the dénouement is to be robbed of the heart of the play, the intensity of the passion, the sacrifices made for love, and the bitter lesson learned, too late, by the warring families.

This is actually a perfect production for young people; it speaks to them directly – through the clothes, the action, even the music (Ed Sheeran’s “Shape of You,” for instance). Reading the play is often static for the fidgety youth forced to study it in school. But here, the gorgeous, timeless words spring to life, making the play palpable, relatable and powerfully heartbreaking.