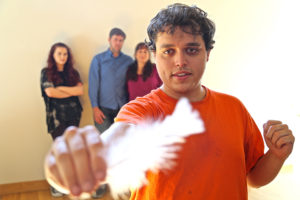 Marriage and parenting are hard, stress-inducing work. But put a child with autism into the mix and the results can be ruinous. 88% of these marriages don’t make it.

It’s a tricky balance, when the many problems —communicative, behavioral and otherwise — of a child on the spectrum become the major focus of the entire family – and can wreak havoc on everyone.

This is the setup in “Falling,” Deanna Jent’s 2011 semi-autobiographical play (she has three children, one of whom has a severe autism; her fictional family only has two).

Josh is 18 years old and minimally verbal. He’s hypersensitive to noises, easily overstimulated, prone to tantrums, and when he’s really frustrated, he can get physically aggressive – pulling hair, biting, pinning someone against the wall and nearly choking them (two of these three are inflicted on his almost-endlessly patient mother). In these frightening moments, his grip and his determination are hard to release.

His sister, Lisa, a neurotypical teen, has had about enough. She wishes Josh would just disappear – or die.

Their parents have a zillion strategies, regimens and compromises to return Josh to stasis or calm, and to keep the household from spiraling out of control. Their marriage, their resolve and their fortitude are stretched to the breaking point.

And a visit from grandma doesn’t help. She seems painfully (unbelievably?) unaware of the severity of Josh’s problems, but when she finds out, she’s certain that the solution is prayer: “God can do everything,” she asserts. “Pray for a miracle – that Josh will be relieved from this autism.”

“Pray for Lisa,” retorts her son. “Pray that our marriage won’t fall apart.” “Pray for healing,” Grammy Sue insists. This time, her son yells: “God said No to that request a long time ago!”

Mom takes refuge in wine. Dad wants to retreat into amorous interactions, but he’s repeatedly rebuffed. In a harshly bitter, frustrated moment, Mom says “”Sex is your prayer for a miracle – and look what it got us!”).

After Josh’s latest bout of aggression, his parents are faced with another dilemma: can they continue to keep him at home, or is it time to seek out some sort of outside living arrangement? Although they have a united front on most issues, on this one, they can’t seem to agree.

The situations are so raw and real, and the theater so close and intimate, you find yourself holding your breath, or gasping for it.

While you’ll undoubtedly learn a lot about what it might be like to live with a person with an autism spectrum disorder, the play is not directly educational or didactic. It’s an aching slice of life – the kind of life lived by 3.5 million families in the U.S. (1% of the population).

Samantha Ginn, a celebrated local actor and a teacher and improv coach for kids with “unique needs,” is making an auspicious directing debut. She and her excellent cast bring a palpable authenticity to the work.

We feel the brief moments of joy (a box of falling feathers delights Josh, and by extension, his parents), the strains on the parental relationship, the anguish of the backgrounded sister and the nonplussed grandmother, and the accommodations everyone has to make to meet Josh’s needs and cope with his behaviors.

D. Candis Paule and Steve Schmitz are wonderfully grounded and credibly connected as the parents. Alanna Serrano is snarkily sarcastic as Lisa. Kathi Copeland is spot-on as the rigid, Bible-thumping grandma, who softens and gradually comes to see that perhaps she can offer some support, rather than being critical or unrealistic.

At the center of all this anguish is Robert Malave in a stunningly genuine performance as Josh, with all his rocking and self-stimulation, fidgeting, routinized actions and utterances, hand posturing, wrist-shaking and outbursts; he’s perfected it all, and the result is not only believable, but deeply heart-rending. He also gets to play another role, briefly, which is the antithesis of Josh: controlled, focused, adult and professional. It’s a lovely display of his dramatic flexibility.

Ginn keeps the pace brisk and the sentimentality to a minimum. Everyone plays it very real; if there are conflagrations or histrionics, they’re completely organic to the piece.

You’ll come away with increased knowledge, and gain an appreciation of how hard these parents work to keep their child – and themselves – in balance (here, one of them has to be with Josh at all times; therapists and aides have given up). Your empathy is likely to be enhanced.

If 70 minutes is an intense and gut-wrenching experience for you, just imagine a 24/7 life like this.