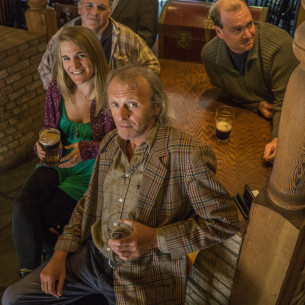 You don’t have to be from a backwoods, rural hamlet to drink yourself silly in Ireland. But in the unnamed village in Conor McPherson’s breakout 1997 play, “The Weir,” there isn’t much else to do.

So the regulars, a cluster of single men, come together for a wee bit of camaraderie, to share a few pints and a short one, that is, a side shot of whiskey, before returning to their dark, lonely homes.

But this windy, winter night is different. Finbar, who moved away to a bigger town some time ago, is stopping by, with a new arrival – a young woman from Dublin.

The men are intrigued, and they soon launch into a little competitive storytelling. The Irish, of course, are legendary raconteurs, and with their fairy forests and backyard leprechaun houses, they’re superstitious supporters of the supernatural.

Each of the tales is increasingly harrowing – about phantom window-tapping and ghostly appearances – unnerving both teller and listeners. Gradually, the stories become more personal, too – revealing a great deal in this otherwise teasing, back-slapping milieu. And then Valerie, who’s been a wide-eyed audience all this time, tells a doozy that tops them all.

The intimate space of New Village Arts makes us feel that we’re right there in the dim, weathered pub, getting more than a little creeped out as time passes. There’s no intermission, but Guinness and Jameson’s are available before and after the show.

It’s a wonderful production, sharply and sensitively directed by Kristianne Kurner. The ensemble is outstanding, each of the five as active a listener as a teller.

The design is beautifully detailed, including the dim light and the whistling wind. After this night of incessant imbibing, you might just feel like you need a drink – or like you’ll never touch the stuff again.

“The Weir” runs through November 1 at New Village Arts in Carlsbad.