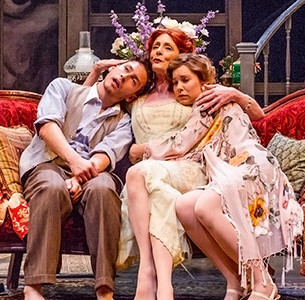 Cygnet Theatre is calling its repertory pairing of two Noël Coward plays its “Coward Yin and Yang.” The plays themselves are disparate – but so are the productions.

In the opening-day double bill, “Hay Fever” came first, though it post-dated “The Vortex” by a year (1925, 1924). “Hay Fever” is quintessential Coward, an arch comedy of bad manners. As bubbly and sparkling as champagne, the show floats airlessly by. With a light, frothy touch, associate artistic director Rob Lutfy helms an outstanding ensemble of nine, each providing expert character delineation. It’s a sheer delight from start to finish.

The beautiful, vain Bliss family adores itself. They are all artistes, of a sort, and completely and totally self-absorbed. They function as a self-contained unit, endlessly self-admiring and self-amusing. They generally find other people tedious but, being London cityfolk who feel trapped in their country house trying to act like landed gentry, each in boredom has invited a guest for the weekend.

They will all proceed to toy with their hapless visitors like cats pawing mouselets, embarrassing and humiliating them, professing love and marital intentions, then sashaying off into another room with a different victim. It’s all fun-and-games to them, while the traumatized guests flee at the earliest chance.

The mother, Judith (imperious Rosina Reynolds), is a celebrated actress who has reluctantly given up the stage. She wants to be forever famous and beloved – but most of all, forever young. She, of course, has extended her invitation to a much younger man who seems to adore her.

Her two children – delightfully daft Simon, the artist (Charles Evans, Jr.) and Sorel, the semi-serious-minded dilettante (Rachael VanWormer), also express readiness for love. Sorel, in fact, is ready to change completely (so she says). She seems to be the only one who realizes how perfectly awful they all are. But she just can’t stop herself when she sniffs fresh prey.

The family is rounded out by the writer-father (Paul Eggington, making a welcome return to a San Diego stage), who spends most of his time upstairs in his room; and Clara (Rhona Gold, very funny), the put-upon maid who used to be Judith’s dresser. She objects to pretty much everything she’s asked to do, and lies about on the settee whenever she can.

Each of them is deliciously disagreeable, and yet, somehow irresistible.

Into this maelstrom gingerly step a diplomatist (uptight, prissy James Saba, absolutely hilarious), a clueless ingénue (Lauren King Thompson), a sophisticated flapper (statuesque Jill Van Velzer), who was invited by the son but makes a beeline for the father, and a way-over-his-head young man (AJ Jones), who barely knows what hit him.

The cruelty of the Blisses is offset by their endlessly clever, quippy repartee. Their arty, ornate abode (designed by Sean Fanning) is superb, with a gigantic portrait of Noël Coward far upstage, overseeing the proceedings. The glorious, elegant costumes (Jacinda Johnston-Fischer) are nonpareil.

We go out mocking and laughing, having had a perfectly marvelous time at a high-spirited revel – though we wouldn’t necessarily want to go back to this narcissistic madhouse any time soon.

Then comes a long intermission and we’re in another wealthy home with another neurotic family.

“The Vortex,” which was Coward’s first (and probably most controversial) success, may also have a party – but the play and production don’t feel like one. This show takes a dark, (melo)dramatic turn toward the end of the three acts (here presented in two segments), but the scene of late-night recriminations doesn’t feel dramatically earned.

In fact, after the first half, we still aren’t sure who all the players are or what their relationships may be. As bright and crystalline as “Hay Fever” seemed, that’s as muddy and maddening as this play felt.

Instead of the post-WW I setting of newfound freedom, director Sean Murray (like two other L.A. productions last year) has plopped it into the ‘60s – another time of upheaval and change and liberation. A reasonable choice, though Coward-time is more tastefully chic.

Rosina Reynolds plays pretty much the same character as in “Hay Fever”: a woman who’s terrified of not being young and beautiful and loved. Saddled with a beaten-down husband (Paul Eggington) who knows what she’s up to but stays out of her way, Florence pursues serial affairs with much younger men. Some writers have referred to her as a nymphomaniac, but that doesn’t seem apt. Her pursuits appear to be far less about sex addiction than strategies for self-reassurance.

Her dissipated, cocaine-addicted son, Nicky (Charles Even, Jr.), who’s been away in Paris for a year, has come home to announce his engagement to Bunty (Rachael VanWormer), who has some past connection to Mom’s latest beau (AJ Jones), though it’s never quite defined. Neither is the presence of Clara, a singer (Lauren King Thompson). Or the details of Pauncefort (James Saba), a flamboyant fop; is he an alcoholic? Or just a lace-encrusted cynic? There’s a complex network of clandestine interactions/relationships that is never satisfactorily disentangled.

Both Bunty and Helen, Florence’s honest younger confidante (Jill Van Velzer) are apparent voices of sanity, but no one is listening. Florence is wrapped up in herself and, to a much lesser degree, her son (whom she repeatedly kisses on the mouth).

They have their knock-down, drag-out Oedipal confrontation scene at the end, where everything is spelled out by Nicky, except maybe his homosexuality, which has been covertly alluded to by other characters (the play did premiere in the 1920s, when all these activities were scandalous – as they still are for some today). There’s a lot of same-time talking and yelling, which diminishes the effect and the details. Earlier dialogue has been muffled by desultory mumbling by the various jaded characters, who aren’t half as glib as they think they are. The tonal shifts in the play are not smoothly transitioned.

The sets are fun (and quickly changed), the costumes once again are stunning (blue-haired Jacinda Johnston-Fischer is a find!), but since it took so long to find out everything that was going on (some relationships actually remained an enigma), it was hard to feel invested in the dénouement.

It’s easy to see why Coward’s comedies are the ones that have endured. He was at his best in the fizzy champagne mode. Dramatic histrionics don’t suit him as well (though he created the role of Nicky as a juicy acting opportunity for himself – at age 24 —  and it was that play that catapulted him to stardom).

You might get sucked into “The Vortex,” but don’t sneeze at “Hay Fever” – it’s the more salutary experience.

Cygnet Theatre’s rotating repertory of “HAY FEVER” and “THE VORTEX” runs through 11/8, at Cygnet Theatre 4040 Twiggs St. in Old Town

Performances are Wednesday and Thursday at 7:30pm, Friday-Saturday at 8pm, Sunday at 7pm, matinees Saturday at 3pm and Sunday at 2pm.