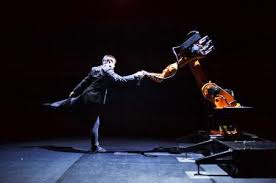 If your taste runs to performance that’s outside the box, this has been a bountiful week in San Diego – particularly on the UCSD campus.

Last weekend was the 2nd La Jolla Playhouse Without Walls (WoW) Festival, a 3-day cornucopia of 22 intriguing, often exciting, site-specific events. Many pieces were outdoors and immersive, engaging or interacting with the audience.

And then, on September 14, along came “Huang Yi & Kuka,” courtesy of the University’s ArtPower performing arts program.

Yi is a Taiwanese dancer, choreographer, inventor and videographer who’s always had a fascination with robots. As a child, he’s confessed, he longed for a robot companion. Now he has one.

Kuka is a German-made industrial robot that Yi has programmed to become his dance partner. It’s hard not to anthropomorphize this graceful, jointed, metal-and-tubing crane-like ‘collaborator.’ In the post-performance Q&A, Yi said he thinks of the robot more as a puppet than a colleague. It takes him about ten hours of painstaking programming to create one minute of movement; the performance lasts a little over an hour.

At first, the robot and the dancer seem to be scoping each other out; they’re both cautious, tentative, suspicious. Kuka ‘explores’ Yi with a flashlight. When they finally see ‘eye to eye,’ they recognize their similarity and compatibility.

The moves are slow; we hear the gears of the robot, as well as taped accompaniment that ranges from Bach to Arvo Pärt to a metronome (about which Kuka seems particularly curious and simpatico).

The lighting is dim; pinlights, spotlights and lasers pierce the semi-darkness and narrow our focus, ensure our intimacy with the work.

In the second vignette, Kuka is equipped with a videocam. Kuka’s perspective upends ours; we see everything, including ourselves, the audience, from a shifted viewpoint. Our attention is split, torn between the actual dance moves onstage and the angular, modern-art visuals that Kuka shows us.

The third segment is the most powerful, and the most beautiful. This is a pas de deux between Yi and Kuka, and it’s brilliantly conceived and executed. The sense of empathy and partnership is heart-stopping.

Part four sees the robot as puppeteer (“I was Kuka holding the camera, controlling the other dancers,” explained Yi). Kuka seats a couple (offering chairs to dancers Hu Chien and Lin Jou-Wen) and brings them together, forcing them to touch and hug. But then, they fall back into their prior robotic states, with jerky moves and little real interaction.

The boundary between man and robot has clearly been breached by Yi, in profound and provocative ways. It’s hard not to impose a narrative interpretation, having read the artist’s statement in the program. The loneliness of the young boy is palpable. So is the story of his parents’ post-bankruptcy suicide attempts and their son’s efforts to compensate by becoming the perfect child, in effect, a robot.

A sadness runs through the piece. There is no joy in these innovative interactions. The pace is glacial; the moves are methodical, hypnotic at times. And when asked if he’s ready to retire Kuka, Yi said he’s far from done with this experiment. Within two years, he plans to acquire the next generation Kuka, which will have a sense of touch on its surface.

Look for the newest version of Yi’s performance. It’s sure to raise your eyebrows, if not your pulse.