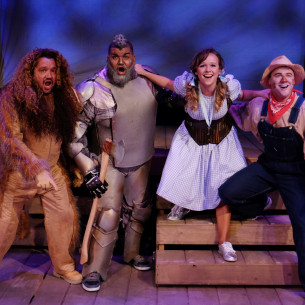 It takes courage, brains and heart to try to improve on perfection. “The Wizard of Oz” may not be an exact musical representation of L. Frank Baum’s 1900 classic, “The Wonderful Wizard of Oz,” one of 14 of his Oz books, but it’s a beloved film (and stage show) with a fantastic, memorable, singable score — by Harold Arlen and Yip Harburg.

Now, along comes Jon Lorenz, a long-time actor, musical director and arranger at Lamb’s Players Theatre (also a co-creator of the long-running “MixTape”), to imagine a fresh version called “Oz,  A Wondrous New Musical,” which charmingly coincides with the 125th anniversary of Coronado, where L. Frank Baum wrote several of the Oz stories.

This premiere is purported to hew closer than the film to the original book, but there aren’t that many differences; it isn’t really “darker,” as suggested; the magic shoes are silver, not ruby red; the whole thing wasn’t a dream; – and the most interesting, if somewhat inexplicable addition – the Cowardly Lion is Mexican, with a heavy accent, a bevy of Spanish exclamations, and a wicked sense of humor.

Otherwise, the endeavor feels a little derivative – in both storytelling and songs. The score is an appealing American roots mix of country, gospel and ragtime, with references to other Broadway shows. There are some surprising Biblical allusions (like the Scarecrow being “made in the image of his maker”). Baum himself, though raised Methodist, sent his children to an Ethical Culture school to learn morality, not religion. He also, by the way, tried his hand at a musical version of “The Wonderful Wizard of Oz,” and failed. It isn’t easy.

The costumes are a highlight of this bouncy production, with their Victorian Steampunk look. The all-wood set is fine for the reported “Gray” of Kansas, but nothing distinguishes Oz. Dorothy is enthralled by its many colors, but they never make an appearance, except in the green lighting of The Emerald City.

The seven-piece band is high-spirited, as is the talented and malleable cast of 14, headed by adorable Megan Carmitchel. The vocal arrangements and harmonies are lovely. But do we really need another journey down the yellow brick road? 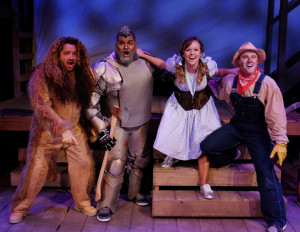