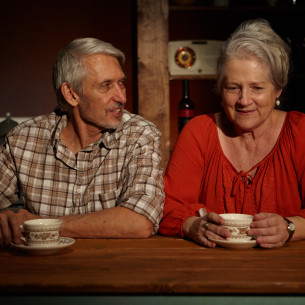 “Chapatti” is an Irish play with an Indian name – and that’s not the only unusual part of it.

Galway-based writer Christian O’Reilly presents two senior citizens – both lonely, unhappy and utterly devoted to their pets. He’s got a dog; she has 19 cats. They meet-cute at the veterinarian’s.

From the get-go, you know how it will end. Yet O’Reilly inserts several unpredicted barbs, barriers and twists that maintain focus despite a sluggish start and the rusty structure of alternating monologues. After the first listless 45 minutes, things start to get interesting. The text moves from direct address to sharp, sometimes witty and thankfully un-treacly dialogue.

We learn the rocky backstories. We see beneath Dan’s slavish loyalty to a lost love and how Betty has lost hope of ever knowing love at all. Then, she gets gutsy, and he gets a kick in the pants. Both are forced to take a hard look at what makes life worth living. Several surprisingly serious issues of aging are presented by this young writer.

It’s a quiet, unassuming play, set in two working-class flats in a Dublin suburb. We could be anywhere, but the Irish accents add a bit of dash. At first, Ivey has the two stick to their own sides of the stage. But as their interactions grow, they cross the midline and start surreptitiously sharing a kitchen, a teapot or a parlor chair. Nice touch.

Mark Bramhall and Annabella Price are excellent, both separately and together. He plays the good-hearted, lovesick griever who tries to be curmudgeonly, but can’t. She’s the caregiving wallflower who turns feisty and aggressive in grabbing what may be her last chance for a little joy – and maybe even some sex. We come to care about them, without any gooey sentimentality.

Chapatti is an Indian flatbread. It’s also the name of Dan’s dog. And while flat may apply to this play’s beginning, it rises to a yeasty finish.