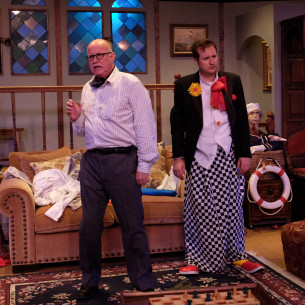 The great thing about Anthony Shaffer’s intellectual cat-and-mouse game, “Sleuth,” is that it’s so intricately and exquisitely plotted, even if you’ve seen it before (not too too recently), you can experience the shocks and surprises all over again.

In the interest of not spoiling the fun for anyone, all that can be said is that the multi-layered puzzler is set in an English country house (natch), where Andrew Wyke has invited Milo Tindle for an evening of fun and games — with a little playful humiliation and a hint of murder thrown in. The tricks and ruses pile up, and things begin to spiral out of control, what with clowns, burglars, inspectors and all manner of smart, mangled mayhem.

Scripps Ranch Theatre is presenting a dazzling production, under the taut, hair-trigger-timed direction of Charles Peters.

Tim West and Tom Steward are terrific as Andrew and Miles, though who’s the feral cat and who’s the diseased rat at any given moment is hard to say. They play off each other brilliantly (and play — though it may be deadly — is the operative word here).

Whether you like deeply entangled detective stories or hidden cues, mind-games or a battle of the wits, you’re sure to relish these two hours of “Sleuthing.”

Scripps Ranch Theatre’s “Sleuth” continues through Oct. 11 in the Legler Benbough Theatre on the campus of Alliant University

Performances are Friday-Saturday at 8 p,m,, Sunday at 2 p.m.