“THE WANDERERS” at The Old Globe 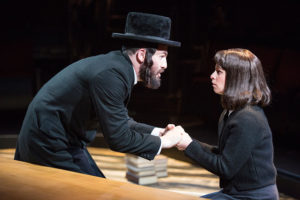 Two disturbing stories are being told in parallel in “The Wanderers.” Unexpectedly, both turn out to have dire personal consequences: one tragic, the other internally cataclysmic. And both are based in fact.

Anna Ziegler’s new play, commissioned by The Old Globe (her intriguing 2016 work, “The Last Match,” was also first staged at The Globe), has a number of sharp turns and surprises, which keeps us engaged in spite of some less-than-lovable characters (particularly the men).

When we meet her, in the late 1970s, Esther (wonderfully ingenuous Ali Rose Dachis) is a new bride in an arranged marriage to Schmuli (Dave Klasko, sporting payes). They are ultra-Orthodox Jews in the Yiddish-speaking, Hungarian (Satmar) tradition, part of a huge Hasidic community in Monsey, upstate New York.

She’s not half as shy as he is; she has an insatiable hunger for life and a range of experiences. Unfortunately, the strict proscriptions of her religious sect forbid her from venturing out, or even reading secular books. Once she has a baby (or three), even “Winnie the Pooh” is off limits.

Schmuli is a spineless Daddy’s boy who consults his father on everything – including very personal marital matters.

As we watch this marriage rise and fall, we encounter another couple, 20 years later, in hipster, artist-riven Brooklyn.

Then Abe, after a chance encounter on his book tour, starts an online relationship with a famous movie star, Julia Cheever (lovely, classy Janie Brookshire), and it upends all their lives.

The email exchange is based on a very public and intellectually flirtatious electronic interaction between Israeli actor Natalie Portman and Jewish writer Jonathan Safran Foer, which was published in the New York Times in 2016.

This fictional one goes deeper and further, but the essence remains the same –  a mutual professional admiration leads to playful repartee, each trying to impress the other with literary (and other) cleverness.

The punishingly cruel repercussions for women wanting to break away from the restrictive confines of Hasidism are also all too real (see, for example, the 2017 Netflix documentary, “One of Us”).

Both Ziegler and director Barry Edelstein have lived adjacent to the Williamsburg area of Brooklyn, home to one of the biggest Orthodox communities outside Israel, and the largest concentration of Jews in the U.S. So they know the territory.

How Ziegler’s two couples relate is the crux of the story. But the through-line is a kind of restlessness, a disquietude, a nagging question of whether what they have is really what they want – or what’s best for them. Happiness is elusive for all these restive characters – and they make some potentially dangerous choices in pursuing it. The exception is Schmuli, who remains more or less consistently on his designated path.

The play’s title, we’re told, refers to the Jews wandering in the desert. But it also concerns these particular characters, and people in general who wander through their lives, forever seeking greater satisfaction, but finding (sometimes too late) that contentment is not attained in the outside world; it’s within.

Jewish history and Jewish guilt play a prominent role, and Ziegler effectively weaves them into the story, at first subtly, then climactically.

The scenes are announced as “chapters,” but the meaning of that writing/re-writing of history doesn’t become clear until the very end.

Ziegler’s dialogue is consistently crisp, but Sophie’s character is not as clearly etched as the others. The cast is uniformly excellent, though the accents and Yiddish/Hebrew pronunciations are not always convincing.

Edelstein’s direction is sensitive and understated, and he has found inventive ways to represent email exchanges without resorting to projections.

The production’s main set-piece is a huge library table, with stacks of books surrounding it on the White Theatre arena stage.

Literature features prominently. Philip Roth, that ultimate New York Jewish writer, is repeatedly invoked. The tomes also bring to mind the Good Book, the Jews as People of the Book, the notion of forbidden written works, and the voracious readers/writers who inhabit this world.

But the table (which sometimes serves as stage) seems longer than necessary, and the lighting (Amanda Zieve) is enigmatic. Bright, narrow light strips are inlaid in the parquet floor and also drop down from above. Are these suggestive of the snow referred to in many scenes? Or the illumination of electronic devices? The symbology is unclear.

The 100-minute intermissionless play leaves you with a sense of melancholy, and perhaps a contemplative reassessment of your own life, choices and perceived satisfaction.