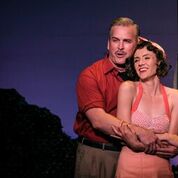 Though it’s a big production — high energy and enjoyable — there’s virtually no dancing in what should be a dance-happy musical. Numbers like “Bloody Mary” and “There is Nothing Like a Dame” should be choreographic show-stoppers. Here, there’s only the most basic of movement throughout.

The 1949 musical certainly retains a whiff of cultural insensitivity. It’s a show of its time, though the very pointed message about racism and prejudice being “carefully taught,” not inbred, remains painfully relevant today.

Rodgers and Hammerstein creations may age, but they always contain a nugget of truth about humanity. Adapted from James Michener’s Pulitzer Prize-winning novel, “Tales of the South Pacific,” the musical is set on a small South Seas island, where sailors and Marines are waiting, stalled on the periphery of World War II military engagement. In the meantime, they generate a ton of fun and mischief.

Though the sets, lighting and costumes provide color and context, there are some vocal weaknesses among the principals.

This production’s strongest element, by far, is Robert Townsend as the sophisticated French planter, Émile de Becque, who falls hard for Ensign Nellie Forbush, the naive nurse from Little Rock, Arkansas. Townsend towers over everyone else, vocally and dramatically. He has the perfectly rich, warm baritone to make songs like “This Nearly Was Mine” bona fide heart-breakers.

Carolyn Agan is amiable as Nellie. Her most successful number is “I’m in Love with a Wonderful Guy,” which she plays with the giggly girlishness of new romance.

In the character roles, Agustine Wells is a minimally macho Luther Billis, and this schemer falls short of a dominant comic powerhouse. Gigi Coddington is a formidable Bloody Mary, the huckster islander whose wily salesmanship outsmarts the Seabees, as she searches for a suitable mate for her lovely young daughter, Liat.

Director Kirsten Chandler offers some creative moments, but no new insights. The 15-piece orchestra is excellent, and the choral singing is compelling.

“South Pacific” has some dark themes. As a counterbalance, the show should have ebullient, dynamic dance. Without it, this production is only sometimes an “enchanted evening.”