“NEXT TO NORMAL” at the Coronado Playhouse 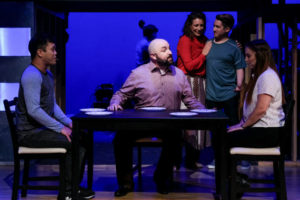 Lots of families are unhappy and dysfunctional. And many have trouble communicating. But the Goodmans have extra angst: a long-ago family trauma that lingers, and won’t go away. And a mother who suffers the anxiety, mania, depression, hallucinations and pill-popping instability of bipolar disorder.

So, Diana has distanced herself from her frustrated, snarky 16 year-old daughter (compelling, credible Chloe Marcotte) and her faithful, put-upon but ineffectual husband (Anthony Donovan), who isn’t the family’s best communicator.

The psychopharmacologists seem to have tried every conceivable cocktail combo – to no avail. They are stumped; Diana’s responses to treatment keep defying expectations. As a last resort, they suggest ECT (electroconvulsive therapy, AKA ‘shock therapy’). It’s a tough decision; both Diana and her husband have to sign off on it. The most harrowing side effect is loss of memory. Diana’s is extreme.

Meanwhile, Natalie, a smart, nerdy music prodigy gunning for a full ride to Yale, meets up with the sweet stoner, Henry (Peter Armado, convincing and sympathetic) who turns her on to jazz and pot and unconditional love. But her mom’s pills are far too enticing and accessible – and Natalie has a lot of escaping to do in this family. Mostly, she feels like an “invisible girl,” while her brother Gabe (charismatic SeeJay Lewis) is treated as a “Super Boy.”

All these layers of pain, anguish, conflict, distress and medical detail are conveyed, surprisingly but effectively, through music in “Next to Normal,” the Pulitzer prize-winning 2009 musical, which was nominated for 11 Tony Awards and won three, including Best Score.

That score, with music by Tom Kitt and lyrics by Brian Yorkey (who also wrote the book), features jagged, high-energy rock that, like Diana’s illness, spans a spectrum of emotional peaks and valleys. The two most potent and memorable numbers – expertly delivered at the Coronado Playhouse – are Gabe’s rebellious assertion, “I’m Alive” (part of which was recorded by Justin Bieber), and Diana’s heart-rending lament, “I Miss the Mountains,” about how the drugs flatten her emotions.

Director Chad Oakley brought the project to the Coronado Playhouse, and clearly (as expressed in his program notes) he has deep feeling about the musical. But he doesn’t always trust the material, feeling a need to add sometimes distracting, mostly extraneous projections to the aptly skeletal set. Sometimes, those serve as on-the-nose indicators: lighting flashes flit across various ‘screens’ when lightning is mentioned. Sometimes they actually undermine the song; “I Miss the Mountains” is not in any way about actual mountains… but there they are, rising behind an agonized Diana.

The lighting is garish at times. The sound is sporadically problematic; the head mics aren’t always balanced, and can’t always accommodate the powerful, high-volume voices. The staging tends toward over-reliance on downstage, direct-to-the-audience singing.

These elements work against a show that has always been about simplicity, and creating a claustrophobic setting for a disconnected family hemmed in by distress and denial.

The harmonies are superb, and the challenging, angular score is wonderfully handled by the cast and excellent six-member band, under the musical direction of Martín Martiarena. The violin, cello and standup bass add considerable depth and complexity.

Once again, the Coronado Playhouse has stuck its neck out and brought a hugely demanding piece to its neighborhood – and made it sing. This one can also be seen as something of a community service; the theater has partnered with the Depression and Bipolar Support Alliance of San Diego, which has placed leaflets, fliers and contact information on a table in the theater.

“Next to Normal” is as dark and discomforting as a musical can get, though it makes an attempt to end on a note of hope. You’ll likely be shaken, touched or disturbed by the piece. But you won’t be unmoved.