“SCHOOL OF ROCK” at The Civic Theatre Broadway San Diego 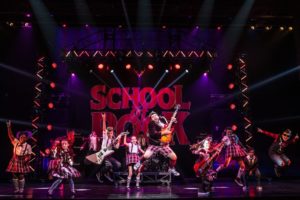 The references appeal to the Boomers (Stevie Nicks, Black Sabbath, Mama Cass, AC/DC). The kids appeal to the kids (recommended for age 6 and up). And the music appeals to everyone.

“School of Rock” is a rockin’ roof-rattlin’ crowd-pleaser. The spontaneous, enthusiastic standing ovation on opening night was well deserved.

The musical is based on the hit 2003 film of the same name, which was loaded with songs, but mostly covers of famous rockers. The title tune was written by Sammy James and screenwriter Mike White.

The same year the film was released, Andrew Lloyd Webber purchased the rights, and composed 14 new songs for a stage musical, with lyrics by Glenn Slater. The best of the bunch, “Stick it to The Man,” is reprised several times.

Lloyd Webber brought in “Downton Abbey” creator Julian Fellowes to write the book, which hews closely to the original story, whose  wacky lead character was originally played by wildman Jack Black. But Fellowes fleshes out some characters and backstories.

At the center is bloaty, disheveled, zhlubby slob Dewey Finn (kinetic, megawatt Rob Colletti, a wildman in his own right), a failed singer/songwriter/guitarist who has become unemployed at the same time he’s kicked out  of his band, No Vacancy (which has a super-hot frontman played by Hernando Umana, who rocks “I’m Too Hot for You”).

Dewey is also about to be kicked out of the apartment of his best friend, Ned (Matt Bitter, who makes a great transition from nerd to tricked-out metal rocker). Ned’s girlfriend, Patty  (attractive Emily Borromeo), is aggressively hostile to Dewey, who’s been crashing there, and trashing the place for too long. Of course, he hasn’t paid any rent, and Patty has had it with him.

When a call comes in for Ned from a prestigious local prep school, asking him to come in for an open-ended substitute teaching gig, the ever resourceful (and broke) Dewey poses as Ned and takes the job – though he has absolutely no teaching experience.

What he finds at prissy Horace Green are precocious, high-achieving, generally geeky outsider-ish A students. But when Dewey sees the unbridled talent of these 4th grade kids play classical music (which is fantastic), he decides to turn them all into a rock band – called School of Rock. That will allow him and his little charges to compete against his former bandmates in the upcoming Battle of the Bands. The man always has an ulterior motive.

We get some background info on the primary musicians in Dewey’s young band – all musically mega-talented, with 6th grader Vincent Molden, who plays lead guitarist Zack, as a standout; this is his first theatrical experience.

All the (unsympathetic) parents over-stress and over-schedule their offspring, without paying much attention to them or their needs and real interests (“If Only You Would Listen”).

Dewey has a few contretemps and a couple of more affirmative interactions with the uptight, stodgy principal (Dexie Dorsett Sharp, who can belt and do some coloratura vocal acrobatics).

Despite many obstacles — and no actual academic instruction during this period of weeks — the kids learn to rock the band instruments (transitioning to bass guitar from cello, for instance), and they become a cohesive and mutually supportive group, feeling cool for once – and good about themselves.

The bossy, goodie-two-shoes girl, Summer (big-voiced Iara Nemirovsky, who’s quite good at copping an attitude) becomes the band’s manager. The shy girl, Tomika (Grier Burke) comes out of her shell. And all the kids turn their extreme helicopter parents around (a bit), enabling them to see a different and much happier side of their stressed-out kids.

The production values are high on this touring production. The 6-piece pit band is great, the set and lighting are superb. As is so often the case in the Civic Theatre, it was difficult to discern the often clever lyrics, especially when produced by high-pitched young voices.

There are a few messages here, especially for kids and their parents to lighten up. But mostly, “School of Rock” is a high-energy, high-spirited heckuva good time. Family fare for all.