“HOW THE OTHER HALF LOVES” at North Coast Repertory Theatre 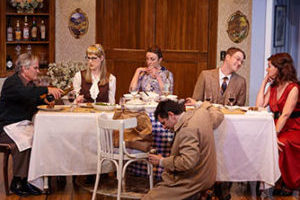 He may be England’s most prolific playwright: 82 plays and counting, over the last 60 years. He may be a knight. He may create juicy and colorful characters. But the comedies of Sir Alan Ayckbourn are rife with cynicism – especially about marriage.

And despite the fact that his 1982 diversion, “How the Other Half Loves,” is as clever as his other works, it does not fit comfortably in this #MeToo moment of how men should treat women.

Among the three couples onstage, there’s one affair, one rumored affair, and one potential affair. The preferred domineering-male response to such an eventuality is the intention to hit his wife. But the women do seem to triumph in the end. Sort of.

One thing Ayckbourn does flawlessly is muck with dramatic structure. He loves to have multiple scenarios and timeframes occurring at once.

At North Coast Repertory Theatre, two contiguous living rooms overlap, so a partner in one home may be sitting next to her rival on the sofa in another house. And when two dinner parties are portrayed simultaneously — with the same two guests — it’s hilarious how the visitors react to one pair of hosts and then the other, in practically the same sentence.

This triumph of timing is due to the splendid skills of director Geoffrey Sherman and his superlative cast.

These may not be likable characters, but they certainly are believable.

The wealthy couple, with a corporate head who seems to be losing his memory and mind (not really a great source of humor any more), are wonderful James Newcomb and imperious and devious Jacquelyn Ritz.

The middle-class pair features Sharon Rietkerk as a beleaguered, slovenly spouse who belittles her baby, and Christopher M. Williams as her caustic, two-timing mate.

The young up-and-comers are nerdy but overbearing Ben Cole and Noelle Martin as his mousey, nail-biting wife.

If you don’t flinch at the misogyny, you’re likely to find it all fun.