“PETER AND THE STARCATCHER” at Lamplighters Community Theatre 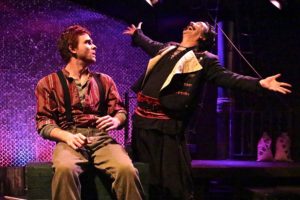 When you were young, didn’t you wish you could fly? Then disaster struck: you grew up.

Everyone’s favorite airborne sprite, the one who never grew up, is back, in “Peter and the Starcatcher,” which is the creation legend of Peter Pan.

The wildly imaginative play by Rick Elice, based on a novel by Dave Barry and Ridley Pearson, was first seen locally as a Page-to-Stage workshop at the La Jolla Playhouse. Later, the national tour came to the Ahmanson Theatre in L.A., after the show won five Tony Awards on Broadway.

In all honesty, I enjoyed the Lamplighters Community Theatre production more than the tour. It’s funnier, more inventive, with great set and sound design and hilariously fanciful costumes. Even the cultural/topical references are more laugh-worthy, with callouts to Starbucks, “Hamilton,” millennials and ‘alternative facts.’

Then there are all those smart, witty alliterations and literary allusions. As Molly, the 13 year-old heroine of the story, puts it, “We love words for their own sake.” Hence, a comically competitive rhyming match staged in a boxing ring.

Molly is one of the world’s 6½ Starcatchers (she’s only an apprentice when we meet her). The magical ‘starstuff’ is enchanted, and Molly’s on a mission to destroy it.

On the way, she encounters orphans, pirates and a giant crocodile. Ultimately, we find out how Peter got his name, how the Captain got his hook, and how the croc got his clock.

Okay, the mermaid and mollusk segments get a little silly, and the songs, by Wayne Barker, seem extraneous.

But director Raylene Wall does a marvelous job of keeping the pace sprightly, the humor bouncy and the goofiness in check.

The play offers a few messages: Be Bold. Don’t give up your dreams. Steer clear of reptilian men and animals. Most important, for us grownups, always remember: “To have faith is to have wings.” Clap if you believe.