“THE UNDERPANTS” at The Old Globe 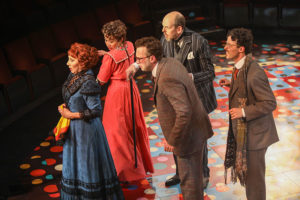 Steve Martin’s “The Underpants” is an equal opportunity offender.

In the name of comedy, the show takes poison-tipped potshots at Jews, women, cat-lovers, civil servants, poets and old men. Some deserve it more than others. In general, though, not so droll.

This adaptation of the 1910 “Die Hose,” by German playwright Carl Sternheim (1878-1942), was originally commissioned by Erna Finci Viterbi Artist Director Barry Edelstein when he ran New York’s Classic Stage Company. The piece now makes its Old Globe debut, the fourth play by Martin at the theater since 2014 (he’s currently billed as the Globe’s “second-most-popular- playwright-in-residence; Shakespeare, of course, is the first).

“The Underpants” is referred to as a farce and a social satire. Except for its demands for an exaggerated over-the-top style, it has little of the former, and insufficient substance to qualify for the latter.

Surprisingly, Sternheim’s own father was Jewish. This play was published and performed in 1911 under the title “Der Riese” (“The Giant”) because the Berlin police had forbidden the original title on the grounds of gross immorality. In later years, Sternheim’s work was banned by the Nazis, and his daughter was sent to the Ravensbrück concentration camp.

So, a German named Cohen (Michael Bradley Cohen) who turns himself inside-out to deny his Jewishness isn’t all that funny.

And a totally subjugated wife isn’t either. The stodgy, self-serving, misogynistic husband (Eddie Kaye Thomas) and the mousy wife (Regina De Vera) straining at her subservient role is a familiar literary trope, but one that grows more wearisome and distasteful over time. Moronic behavior of men smitten by a woman’s bloomers (or other parts) – another laugh riot (not).

Anachronisms abound in Walter Bobbie’s production – musically and otherwise. The modernizations clash mightily with an early 20th century sensibility. Is it part of that mix to have the cast speak in a range of accents? From Joanna Glushak’s German accent to Cohen’s New Yorkese, each has a different sound – and not even the King/Kaiser (Kris Zarif, who arrives to loud visual/aural fanfare) speaks Germanically.  The varied acting styles are also not of a piece; all exaggerate in their own way. And several break the fourth wall to interact with the audience.

The action is triggered by a clothing malfunction at the King’s Parade in Düsseldorf. As Louise Maske jumps up on a bench to get a better view, her drawers take a downward turn and drop around her ankles. She thinks nobody sees, but in fact, everybody does.

Her uptight petty bureaucratic husband, who’s supposed to be burly and robust (Thomas isn’t either), fears that the incident will make him lose his job and reputation.

Two fickle, foolish men – a poet (Luis Vega, charming) and a barber (Cohen, funny) – are besotted with Louise (or is it her — very chaste —  undergarment?). They arrive, separately, to rent the available extra room in the Maske household, and wind up sharing it as they compete for Louise’s attention. The busybody upstairs neighbor, Gertrude (Glushak), an oversexed spinster, encourages Louise to have an affair.

Louise has only been married for a year, but her husband keeps his distance because, money-obsessed as he is, he says they can’t afford a child.

He treats Louise condescendingly, deplorably and dismissively (not so entertaining in these #MeToo times).

Louise, who gets to have the last word (a meager bone tossed to indicate her growing self-awareness), begins to relish her 15 minutes of fame, and misses it when it recedes.

Besides the comic-book characters and characterizations, nearly everyone is practically yelling their lines in the intimate White Theatre space.

The animal props — multiple cats and a caged bird – are cleverly designed to move believably, but their actions and noises become repetitive and tiresome.

There’s one moment of sheer physical comedy genius – when Cohen, as the barber, is given a potent drug by Louise so he’ll sleep through her assignation with the poet. Reportedly unable to feel his legs, he drags himself up an aisle/exit stairway like a slithering drunk serpent. The only truly brilliant comic moment in the production – and it isn’t in the script.

Sure, many San Diegans love anything Steve Martin does. On opening night, some were guffawing, and some gave a standing ovation.

But at 100+ years old (the original) or 17 years old (this adaptation), the play feels uncomfortably dated and, in many cases, unamusing, if not distasteful.

There are a few kernels of social commentary, but they’re offset by fart humor and its ilk.

Far more searing plays – socially and comedically – have been written in the past 17 years. That value should supersede high-profile name recognition.