“ALL SHOOK UP” at San Diego Musical Theatre 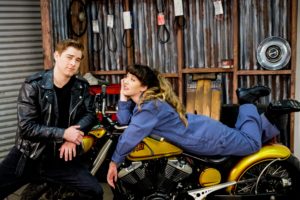 Elvis is in the building (once again). Well, sort of. A facsimile is currently sporting “Blue Suede Shoes” in Vista (Lamb’s Players Theatre’s “Million Dollar Quartet” at the Avo), and a simulacrum is an Elvis stand-in in “All Shook Up,” produced by San Diego Musical Theatre.

The 2005 musical mines the Elvis catalogue for 25 songs – but fewer than half would be considered The King’s Greatest Hits. In fact, there are more ballads than knee-knocking, pelvis-thrusting rocker numbers.

The show (written by Joe DiPietro,” whose locally-seen work includes “Memphis” and “Diana”) opens with a knockout “Jailhouse Rock,” which sets up the story of Chad, recently released from prison for exciting the ladies. From there on, it follows the trajectory of most jukebox musicals, where the story – in this case, over-populated and overly convoluted – is awkwardly wrapped around the songs, not always comfortably.

The SDMT production is energetic (even though some of the oft-repeated songs aren’t). The cast features potent singer/actors. Their voices are strong and their dramatic moments are credible and frequently moving. But almost all are encouraged – far too often – not only to belt, but to sidle over into the realm of mega-uber-super power-belting, which only serves to weaken the music and the show. Trust the voices; not everything has to be an over-emotional sales-pitch.

Also more often than necessary, the cast is subject to “Park and Bark” staging: lining up at the footlights, facing the audience and singing their lungs out.

The dance moves, while fabulous in the opening number, become repetitive (heavy on the high kicks and lindy-hop twirls) as the 2½ hour evening wears on. And they’re not as sharply, precisely, uniformly executed as they should be (and usually are at SDMT). Even the costumes leave something to be desired; some of the women’s outfits are just too tight – pulling, straining and unflattering.

All that said, there are some killer performances here.

Jesse Bradley is pitch-perfect as Chad, the “Roustabout” who motorcycles into an unnamed Midwest town (uptight, buttoned-down, 1955) and turns the place upside-down, unleashing the power of music and love. He has just the right swagger, smirk and bravado – and a sensitive soft side – to make the character fully dimensional.

Both he and his co-star, charismatic Krista Feallock, who plays lovesick Natalie, sing great and move great. Natalie turns herself inside-out to win his love and (in a very oblique reference to Shakespeare’s “12th Night”), dresses as a man to become his sidekick, woo by proxy the woman he adores (Sami Nye as sexpot Miss Sandra) and play out her fantasies by role-playing romance with Chad – with unnerving results.

As Dennis, the would-be dentist who has always loved Natalie, Noah Filley is making an impressive professional debut. He was phenomenal as Melchior Gabor in Grossmont College’s “Spring Awakening,” and deserves to have a lot more exposure on San Diego stages. He has a charming presence.

Brooke Henderson is endearing and adorable as Lorraine, who falls hard for the son of the monstrous Maven-of-morality Mayor (Barbara Schoenhofer). As her interracial love interest, Brendan Dallaire, about to enter his junior year in high school, at the San Diego School of Creative and Performing Arts, exudes geeky cuteness.

Erin Vanderhyde, as smart, sassy Sylvia, Lorraine’s mom, has a powerhouse voice, and she pairs sweetly with Richard Van Slyke as Natalie’s dad, who can really swivel his hips when he tries.

The hard-working ensemble pumps out the often-exciting arrangements (uncredited).

With all the early rock ‘n’ roll music filling our stages this summer, there’s plenty of nostalgia and narrative goofiness to go around.